In this new series, we’ll share stories from competitors’ first year of competition at the United States Coffee Championships. Some stories will be from newly minted competitors, and others will share the success and horror stories from veteran competitors in seasons past. (Read stories in this series from Kay Cheon, Amy Trompeter, Cameron Heath, T. Ben Fischer, and Jenna Gotthelf). If you’re interested in contributing a story about your first year of competition, drop us a line!

VOLUME 6: BY TRACY GILL
Tracy Gill, regional educator for Counter Culture Coffee, coached a competitor before jumping in the ring, but that didn’t necessarily prepare her for the mishaps that can happen on stage. Read on as Tracy details her inspiration for competing, how she prepared, and what her plans are for the future.

The reason I wanted to compete is probably very similar to the reason why a lot of baristas compete: I had been in the coffee game for about nine years and thought, “Hey, I could do this!”

Rewind to two years before, when I got really into competition at my first Barista Camp. That year [2015], it was in Palm Springs, Calif., and they were holding the Western CoffeeChamps at the same time. I was there because I was in a new role at the company I was at—the role was trainer—and I was going for my Level 1 certification. I had some time to sneak away and watch some of the competition. That year, two people in particular stood out to me that I thought were inspirational in their performances: one was Andrea Allen and the other was Michelle Johnson. In a sea full of bearded men, these two both made it look so cool and had their own flair. This was something I definitely wanted to try my hand at.

However, I was still nervous about the idea of competing and had a lot to learn—so I thought I’d coach my coworker and he would be the guinea pig. We sure did learn a lot that year! He did OK and placed right in the middle, but we had no idea what we were doing that year. So, when the next year came, I had already watched many performances on YouTube and watched the movie Barista, so I had a better idea and wanted to give it a shot … even though I STILL had a lot to learn about the competition. The year I competed, my coworker and I switched roles (he was now my coach), and through his advice we went through Barista Magazine’s competition prep timeline and tried to stick to the weekly plan as a way to get ready for competition. I had a lot of fun learning even more about the coffee I was choosing—who the importer was, how it tasted, etc. I can’t deny I also loved deciding my soundtrack. I had a lot of fun prepping and I practiced my speech almost every second of the day that I could.

When the weekend to head to Kansas City came, to say I was nervous is an understatement. I’ve never been so ill about something in my life! I was so caught up in the routine that I barely enjoyed all the wonderful barbecue that Kansas City had to offer. All I really did was practice my routine in my room; I did make it out a little to go to some parties. Long story short, when I actually set foot on the stage, a lot of things went wrong: My soundtrack I worked so hard on skipped around during the routine, my signature beverage espresso shots somehow slid off the scale and I lost about an ounce of espresso, and also my ice was melted. And as far as my speech went, there were words coming out of my mouth, but I honestly don’t remember what I even said (still hoping it was exactly what I practiced).

As quickly as my time started, it was over. That year I didn’t do very well, and I remember the judges’ critiques of me being harsh, and there were a lot of tears shed. But you know what? I competed the following year anyway! Each time I learned a lot of what goes into this competition, and I see why it takes competitors years and years to actually perfect the game. And then you have to ask yourself: Is this a game I actually want to play?

I’ve moved on to a bigger company now, where lots of people would like to give their stab at the barista competition. I coached this year and I STILL learned a ton. Who knows, maybe I’ll get back out there one year?

Tracy competed in the then newly formed qualifying event in the Eastern division in 2016. Will we see Tracy compete again? Who knows! 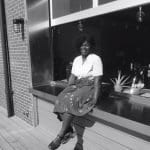 ABOUT THE AUTHOR
Tracy Gill has been in specialty coffee for about 11 years and is currently an educator at Counter Culture Coffee in Durham, N.C.