In this new series, we share stories from competitors’ first year of competition at the United States Coffee Championships. Some stories will be from newly minted competitors, while others will share the success and horror stories from veteran competitors in seasons past. (Read Volumes 1 and 2, and 3 for more stories.) If you’re interested in contributing a story about your first year of competition, drop us a line!

VOLUME 4: BY T. BEN FISCHER
You might remember T. Ben Fischer of Elixr Coffee in Philadelphia from his first-place finish at this year’s United States Coffee Competition preliminaries in Rancho Cucamonga, Calif. Before he was a decorated barista champ, T. Ben struggled both personally and professionally to figure out how to serve coffee and what the heck Cafe Imports was at his first barista competition, the 2014 Big Central Competition. (A note about this competition: The North and South Central competition happened together, but the competitions were divided into different categories [North and South], which meant that there was a top six for North and a top six for South who would go on to represent their regions at the 2014 USBC. This competition was called the 2014 Big Central Competition, but it was held in October of 2013).

My very first barista competition was held in a boxing gym in Minneapolis only 10 months after I started working in coffee. I vividly remember looking up after starting my espresso shots and seeing punching bags dangling from the walls and smelling leather all around; it was surreal. There were also white and red Cafe Imports towels everywhere, and I was too embarrassed to ask, “What is Cafe Imports and why does everyone love them so much?!”

I was terrified going into the weekend because my mishaps in training were countless. One example: my green buyer/roaster, Christian, asked me to carry a bag of my green coffee from the basement to the roasting room. Not seeing the dolly or understanding how heavy bags of coffee are (this one was 60kg to be exact), I tried carrying it myself. Many can to do this, but 22-year-old T. Ben definitely couldn’t. (OK, let’s be honest, I still can’t.) Five minutes later, I had spilled over half of the Natural Worka Ethiopian all over the warehouse floor. It was a great start to my barista competition career. Thankfully, Christian understood, but I was never sent to pick up sacks of coffee again.

Three months post-spill, I was in the boxing gym ready to present coffee to people who knew considerably more than I did; I felt like an imposter. Even with an amazing coach, Sam Brown, teaching me about workflow, techniques to improve extraction, remembering to pour water, and polishing with an electric kettle, I felt underprepared yet still energetic and enthusiastic. How could I give these professionals something new and exciting?

Next thing I knew, I was on stage, wearing a scarf, and talking about this Ethiopian coffee and how a cappuccino can taste like blueberry pancakes. Halfway through my presentation, I dropped an ice cube on the prep table. Instinct took over and I grabbed it, put it into my back pocket, and wiped the droplets of water. Throughout the next eight minutes I felt my booty get wetter and wetter as the ice melted. I was wearing tan khakis so everyone could see this wet spot grow. By the end, my entire right booty cheek was dark brown, but my tech scores came back great (very clean and precise workflow), so it was totally worth it!

That year I took seventh at the North Central competition, and I realized competition is bigger than presenting new ideas or techniques. For me, it was finding my place in the industry. It instilled my passion, set my desire to learn more, and opened a world of education. Without getting too deep, I came out as gay later that year, and the support and relationships I had started to build in the coffee industry [also my family] were the ones that carried me through that difficult time—friendships that last to this day and allow for new ones to form every year.

Anyway! My coach qualified for USBC, and I had the incredible opportunity to attend SCAA with him, watch amazing competitors, and get drowned in coffee geekery. It’s going to sound cliché, but it was a year I will never forget. I had stars in my eyes seeing the ideas on stage and the workflow of these master baristas, and I felt like I was a part of something bigger than myself. To be honest, I still feel this way. After qualifying for USBC a few times, and placing top 10 last year, I continue to be humbled and honored to share the stage with my fellow baristas around the country. Every year I learn more, every year I feel inadequate, and every year I will pump some Disney Jams.

Competing only a few months after getting bar-certified at my home café set me up with an incredible passion for coffee. It instilled in me a desire for perfection, a lust for improvement, and most importantly, the hope that one day I would be an active part of the industry that welcomed me.

Future reference: Grab spilled ice with a towel and fold it over the cube, or just throw it away.

And, finally, two quotes I live by:

“It’s a great day to save lives.”—Derek Shepherd, Grey’s Anatomy
“You don’t have time to be timid. You must be bold and daring.”—Lumiere, Beauty and the Beast 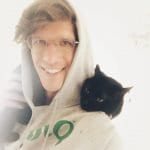 ABOUT THE AUTHOR
T. Ben Fischer is a barista at Elixr Coffee Roasters in Philadelphia and has been making espresso for five-ish years. While he enjoys his hot yoga practice and runs to nowhere, his true love is his cat, Axel. Axel Cat enjoys tuna, avocados, road trips, and snuggles while watching Grey’s Anatomy and animated films.