In this new series, we’ll share stories from competitors’ first year of competition at the United States Coffee Championships. Some stories will be from newly minted competitors, and others will share the success and horror stories from veteran competitors in seasons past. (Read stories in this series from Kay Cheon, Amy Trompeter, Cameron Heath, and T. Ben Fischer.) If you’re interested in contributing a story about your first year of competition, drop us a line!

VOLUME 5: BY JENNA GOTTHELF
Jenna talks about a series of firsts—not just her first barista competition, but her first long road trip, first time below the Mason-Dixon line, and her first stab at reading the rules for the 2014 Big Eastern Barista Competition.

I’ll never forget my first time participating in a barista competition. In January of 2014 I had been working at Northampton Coffee in Western Massachusetts for about nine months. Prior to that, I spent a year and a half working in a café where I learned about barista competition and expressed interest in competing, but was not taken seriously. Even in the “lesbian capital of America,” LGBTQ workplace discrimination is real. When I started at Northampton Coffee, I told the manager, Frances, I wanted to compete, and she said, “We’ve never really done anything like that in this company, but we’ll support you however we can. Go for it.”

I had never done a drive that long, let alone cross the Mason-Dixon line. I also didn’t know anyone who had ever competed. I really just didn’t know the world I was about to step into, but what I didn’t know didn’t matter because I was excited and ready to put in work. I spent the next few months practicing in the café after hours. I worked with the same coffee we served in the shop, clanking out doses on an Anfim until 1 or 2 in the morning. I struggled through milk sharing and figured out how to build (and not build) a signature beverage. Andrew Sanni from Amherst Coffee helped me through some solid practice sessions. I got close to coffee in a way I hadn’t experienced before.

I read the rules a billion times, watched hours of competition footage, and put my heart into a script. I was inspired by the section in the rules that says a champion should exhibit knowledge beyond what they do in their performance. So, I worked with Aaron Taylor-Waldman, a graphic designer in Northampton, to create a T-shirt that said, “See No Weevil.” My performance had no mention of weevils, but I saw this as a way to prove that knowledge. It’s funny what you think of before understanding how the contest really works.

A few weeks before the Big Eastern, I was lucky enough to get a spot at a competition workshop that InterAmerican was hosting in Providence, R.I. My understanding of competition at the time was bloodsport, so naturally I was nervous attending this workshop. Sure enough, I made some great friends and incredible connections. I learned a lot. Katie Carguilo gave me the best competition advice I’ll ever get. Patricia Bruce, Alison Byrne, and Josh Littlefield let me sit with them at dinner when I didn’t know anyone. Jay Presto called a cab and waited with me during the cold, late-night hours of the polar vortex because I didn’t realize the garage I parked my car in closed at 10. I met Phil from BevTech, a Nuova Simonelli showroom up in Eliot, Maine, who let me spend a day trying to figure out how to use a Black Eagle.

About a week before leaving, NoHo Coffee regulars Bill and Marsha told me I could borrow their new Volkswagen Jetta so I would get to Durham safely. Their extraordinary trust and generosity showed me the power of community that can come with serving cappuccinos. I packed their Jetta to the brim with enough wares to compete four times without doing dishes, plugged Durham into a GPS, and embarked on a very long 15-hour drive by myself.

When I arrived at the competition venue, I took four elevator trips to bring all of my equipment to the prep area. I learned very quickly that competition is not something most people do alone. I also learned that you have to polish your wares, wear gloves when you do it, and at a certain point the glass will never be clean enough. I was the second-to-last competitor of day one, so I had plenty of time to watch what other people were doing and learn those lessons.

When it came time to roll out, Adam Snow helped me scoot my cart to the stage. He and Holly Bastin were managing folks in the prep area. Their kindness throughout the day was encouraging and made me feel considerably less alone. I spent the majority of my setup time putting things in their place. Dialing in was a disaster. I had never worked with a Mahlkönig so I was just winging my adjustments. I dosed maybe 14 grams of coffee into the portafilters and my shots ran marathons out the spouts.

That coffee did not taste good, but I had a blast. I brought milk from the Highlawn Farm up in Lee, Mass., and got to introduce the fantastic bovine lifestyle. I put my cappuccino saucers on the other side of the espresso machine and forgot about them, which gave me the opportunity to make a flying saucer joke. My signature drink smelled like the pickles off a McDonald’s cheeseburger. (This line briefly broke the final competitor of the day Erika Vonie’s concentration during her prep time. No big deal though—she went on to crush it and take second place.) Judges came out from behind the curtains of deliberation because of the way my voice carried through the space. I got helpful feedback from my judges encouraging me to continue competing. It was an experience that changed my life. I learned that the coffee industry is a community made of incredible people who elevate and inspire each other to keep pushing forward. It ruled.

My scoresheets may have been riddled with twos, but the impact of my first coffee competition was extraordinary. If you are thinking of competing for the first time, you should just do it. You’ll never forget your first time, either. 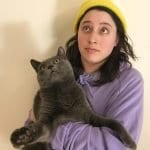 ABOUT THE AUTHOR
Jenna Gotthelf is a working barista in New York City. She has participated in the U.S. Coffee Championships Circuit the past five seasons, ranking everywhere from last to first place in both the Brewers Cup and Barista competitions.