VOLUME 3: BY CAMERON HEATH
We recently talked to Cameron Heath of Revelator Coffee on this site, and we wanted to share a specific story he shared in the past about his experience competing for the first time at the 2016 United States Roasting Competition. After an early victory at a local roasting competition, Cameron deals with figuring out how to train, struggles with his confidence, and learns a big lesson in humility.

My first dive into the competition circuit was prompted by a win at a regional roasting comp called the “Charleston Coffee Comp.” I would say that was a humblebrag, but it was most likely the worst thing that could have happened to me. It was 2016 and I knew nothing about competing in roasting competitions nationally, so naturally I assumed all competitions were mine for the taking. WRONG!

The 2016 United States Roasting Competition was structured oddly, if memory serves me right—I think there were 40 slots total and the only pre-qualifiers were that you hit the “submit payment” button before everyone else. That in itself was problematic; I was rubbing shoulders with seasoned roasters while I was still getting my bearings. I remember when I received my compulsory coffee, it was a Brazilian offering from Ally Coffee. Pretty sure I paid more attention to the rad stickers inside the box rather than the coffee and its quality; I divided up my coffee into two or three 15 pound-batches and stored them away until it was time to roast them.

When it came time to roast my compulsory coffee, I had a very simple approach: zero prep work and use whatever Brazil profile I was using normally. How could I fail? I knew the moisture at least, but I’m sure I didn’t factor that into my roast at all. The roast was decent, but I did notice some burned chaff floating in my finished product. For the most part I disregarded it—not my brightest moment. When it came to my second coffee, I used a bonkers Tanzanian coffee we had on our offering list. I dialed that coffee in over a couple of months and was pretty confident on that roast profile.

Again, this was 2016, so the format was very simple; you didn’t have to talk about your coffee at all, and in fact the coffee did all the talking for you … a thought that only crossed my mind while waiting to drop off my offerings. While we were waiting, one competitor jokingly said, “That compulsory coffee was crazy, right?! That skin was so thin it was like roasting cotton candy.” I’m sure my response was a brief pause as I realized how hard I goofed, followed by an, “Oh yeah! That was crazy!” As a first-time attendee at Expo, the only thing that kept my mind off the competition was collecting swag off the Expo floor.

By the next day of judging, the roasters that made it to the semifinals had batch-brew urns of their coffee sitting out for the audience to taste and vote on their favorite. The urns were unmarked, so me and the director of green coffee at the time walked to each urn and played the game, “Is this my coffee?” After several tries I was certain that one of the six urns was mine, and I confidently wandered around the Expo floor again trying to find whatever swag I missed on my first treasure hunt. When it came time to announce the winner, I misjudged my time and was almost late to line up—the other 39 competitors were already lined up and waiting.

I like Dani Goot’s version of this part of the story the best—she recalls us walking out on stage together, first in a group of 40, then our name is called to the top 20, then top 10. But what actually happened was that I watched the back of Dani’s head as she moved forward and I held onto a “Thank You for Participating” award. The final result? I ranked 34 out of 40. I made it nowhere near the semifinals; my coffee was collecting dust somewhere behind the curtains at Expo before I even knew it. I was crushed.

So what did I learn from this experience? First and foremost, humility. I set myself up for failure the moment I showed up thinking that this competition was mine for the taking. If I wanted to win—or if I wanted to even stand a chance at succeeding—I needed to really work for it. So the months after that I was like a sponge in regards to roast theory. If there was a book I read it, and if there was a video I watched it. I shipped coffee to friends in the industry for feedback, and I took that info and refined my roast. When it came time to compete in the 2017 Coffee Champs, I knew that a good roast wasn’t going to be enough to set me apart, so I spent a lot of time sorting and clean my coffee. Pre-roast, I sorted green coffee by screen size and under UV light. Post-roast, I picked out any quakers and polished my roasted coffee with a pillowcase. I know … sounds crazy.

Taking part in competitions has helped change my view of coffee roasting from doing a job to honing a craft. You learn not only how to roast difficult coffees that you wouldn’t see too often, but you also learn how to talk about your methods in approachable ways.

Cameron went on to compete in the roasting competition at the 2017 CoffeeChamps event in Knoxville, Tenn., where he placed first. He placed 12th at the national competition in Seattle. 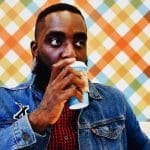 ABOUT THE AUTHOR
Cameron Heath is excited to share his first attempt at conquering a national roasting competition and how he failed miserably to do so. He learned a lot on how to prepare himself and his coffee for competing in the big leagues. He’s the director of coffee ops for Revelator Coffee in Birmingham, Ala.