Although they love the industry, coffee professionals sometimes aren’t able to earn enough to support themselves. Jonathan Pascual of Taproom Coffee talks about how to make coffee viable for yourself and others.

Unlike many baristas, Jonathan Pascual, the proud owner of Taproom Coffee, a shop that specializes in specialty coffee and craft beer, has not only found a way to have a career in coffee, but to support a staff of talented baristas and invest in the Atlanta coffee community. Like many baristas who enter the industry and develop a love for the craft and community, Jonathan knew early on that he wanted to become a shop owner. When asked what sparked his interest in starting a cafe, Jonathan said, “It’s everyone’s dream; it was mine too. There’s a little bit more behind it, wanting to have that community connection. It’s something about the romance, the far-off dream, and the hope of being the coffee shop owner who comes in and chats with people and has that cool community spot. The desire for that, and making a positive impact on the world.”

Like many who dream of owning their own coffee shop, Jonathan began his journey at Starbucks as a barista. But unlike many, Jonathan entered the field looking at things from the perspective of an owner, from learning the operations systems to noticing what it took to run a staff. After a year and a half as a barista, Jonathan moved on to a management position at Chattahoochee Coffee Company, where he helped to open the shop from the ground up. Over the next seven years he opened four other shops, including Land of 1000 Hills and Empire State South, giving him important experience he would need before opening his own shop.

When he began his journey—as a single man—coffee wasn’t initially something that he thought he could support a family on. However, when he became a manager and got married, the salary was “somewhat sustainable as far as wage goes,” Jonathan says. “I never personally had any problems, I was good with money and didn’t accumulate tons of debt.”

Lots of baristas dream of owning their own shops, and Jonathan advises that there’s no straightforward recipe that will help you achieve that dream. “It’s a combination of desire, matched with capability, then the hard work,” he says. “A lot people have that desire but then didn’t make the right decision. A lot of it is just doing it. Many just never pull the trigger. People talk about it, spend months and years planning, but then never end up doing it. There is no shortage of desire, but there is some amount of follow-through coupled with that passion and capability.”

It’s not just on the shoulders of the barista to make a sustainable living in the coffee community. As a shop owner, Jonathan has implemented a program that increases the hourly wage of his baristas once they have completed course work through Counter Culture Coffee and Cicerone Certification (for specialty coffee certification and beer certification, respectively).

Jonathan believes “the culture has to change for there to be people who grow up in it and can stick with it, and have a living wage and not just live off their passion and desire for the product and that be it. It has to be financially stable. Part of the journey of being an owner is helping to change that and paying better wages, making it so that people are more on track for a career rather then just an entry-level fast-food service job.”

I asked Jonathan what advice he would give to someone pursuing a career in coffee. “The stock answer is ‘get experience,’” he shares. “Most people don’t have any experience in specialty coffee, much less in the restaurant industry. Anything would help—customer service, restaurant retail—if your goal is having your own coffee shop, being a manager, or being a career barista. One of the biggest mistakes is trying to jump to owner-operator without ever having an entry-level position anywhere.” 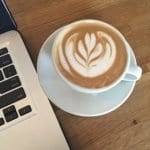 ABOUT THE AUTHOR
L.L. Pruitt is a barista and coffee enthusiast sharing Atlanta’s expanding coffee scene through her Instagram @coffeeatlanta.