Joshua Edens of Onyx Coffee Lab won a trip to Colombia after he wrote an essay on compassion as a means to build bridges between customers, baristas, and producers. On his trip, he learned even more about the ability of coffee to connect and build relationships across the world.

Onyx Coffee Lab has offered me a lot both personally and professionally—and around a year ago, they gave me and my co-workers the opportunity of a lifetime. This last year, Onyx began its Origin Scholarship program through which senior baristas could apply for a trip to origin by writing a collection of four essays over personal and professional topics as they related to the industry at large. This consisted of three preliminary essays—“Why You Should Choose Me,” “Experiencing Origin,” and “What Do I Hope to Learn”—and a pivotal essay in which we would write about an industry topic of our choosing. In my fourth essay, “Compassion as an Art Form,” I discussed and deliberated how baristas could use compassion to express themselves, influence customers and staff, and ultimately build bridges between customers, baristas, café owners, importers, and producers almost 3,000 miles away.

Months later, while sipping on my morning coffee, I received an email from one of our owners saying that I had won Onyx’s first Origin Scholarship and that in mere weeks I would be traveling to Colombia. As my traveling companions Marshall (our assistant roaster), Abby (the assistant manager of our Springdale lab), and I began to pack and plan for this incredible opportunity, many thoughts began to flow through my mind. Was I important enough to be going on this trip? Was I going to represent Onyx well? What was Origin going to be like? And these thoughts persisted up until we stepped onto Colombian soil and I, for the first time in my life, felt completely at ease, comfortable with who I was and where I was at, and felt confident and excited to experience and share this trip with my staff back home. It was with this mindset that I began to document and take in the trip.

We were in Colombia for five days. We spent the first two days in Medellín, where we met with Pedro, owner and operator of Pergamino Coffee. We visited his cafés, walked around his roastery, dry mill, and warehouse, and cupped upwards of 70 coffees in his cupping lab before contracting and visiting the farms and farmers from whom we planned to buy coffee. The second night in Medellín, we participated in one of the world’s first international latte art throwdowns between two cafés, where four of us from Onyx would compete against Pergamino’s three store staff for the title of Best Latte Artist. Having participated in many throwdowns before, I was excited to compete and hopefully win, but to see their staff compete with such pride, joy, and dedication to their craft was eye-opening and a reminder of why we’re all here: to serve customers, or in this case judges, with purpose and intent.

After two days in Medellín, we spent the night in Bogotá, then flew out the following morning to spend the next two days in various towns throughout Nariño visiting two associations, where we would cup an additional 120-130 coffees and visit three farms we planned to buy coffee from and begin to build relationships with them. For all of us, this was our first time ever seeing a coffee tree, so to be able to cup a coffee on the table two days before, travel to the farm, and then pick, process, and dry the elements of that same coffee was surreal and really allowed us to put the industry chain in perspective.

On the last day, after having flown back from Colombia to the U.S., I was enriched and full of excitement. I was inspired. I had and still have so much to share about my trip, but what I have to share most is more than just pictures and stories of people and places from our trip, but a feeling—compassion. We experienced this everywhere we went in Colombia. When coffee was served to us, it was served with a smile and a purpose; it was served with intent. When we were cupping coffees, grading them and discussing them, it was not only objective—it was personal. It was with the intent that we were going to be bringing back something that could be shared, have stories told over, something to spend mornings waking up with. When we were visiting farms, we didn’t walk up and down hills of coffee with a producer. We walked with a friend—someone with whom we felt that through opportunity and talent, we could share their livelihood with the world.

I knew this before my trip, but it wasn’t until after I got my hands a little dirty that it really began to ring true. Coffee is more than just a beverage or a commodity, it is a relationship. And relationships, when done right, are but the breath of compassion. And compassion, when spoken, is a connection between the hands of our customers and the hundreds of hands that came before us. When we serve coffee, we do not just serve customers, we serve our friends, we serve an industry, we serve a higher purpose. Remember that at the end of a busy shift. Remember that when you’re managing a customer who just needs a little more attention. Remember that when you’re making a latte for your favorite regular. Remember why we’re here—to serve. 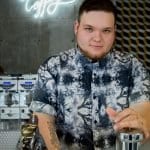 ABOUT THE AUTHOR
Joshua Edens has been a barista at Onyx Coffee Lab for two years. He’s passionate about art and people. He studied chemistry and biochemistry at the University of Arkansas and dreams of opening his own café and traveling much more in the future. He loves conversation, so if you happen to see him sipping coffee or making your drink in any one of the Onyx labs during your travels, feel free to introduce yourself. Cheers!