In this installment of our “Life Behind Bars” series, we talk service with Sam Lewontin, general manager at Everyman Espresso in New York City. Sam takes great measure in planning out how service plays out behind the bar, and looks to his own personal experiences in restaurants and bars. Read the introduction to the series here and the first installment with Amanda Whitt here.

Bartenders and baristas deliver different styles of hospitality based not just on their profession, but on their establishment as well. It’s easy to imagine canonical stereotypes of the bartender polishing a dirty glass over and over, or the barista staring at a bottomless portafilter way too intently. However, the style of service does not have to be limited to whether coffee or alcohol is being served, as long as the goal is a more inclusive, welcoming environment.

Cafés and bars have traditionally set rules and expectations: line up to order in a café, sit and wait to order with the bartender at a bar, for example. These schemas are a good thing—they provide for a smoother interaction between guest and server, as well as a more fluid experience in terms of workflow and how customers behave. But just because there are certain norms about how you order in a café doesn’t mean that’s how it should be. Sam Lewontin, longtime barista competitor and manager at Everyman Espresso in New York, describes turning to bars and restaurants for inspiration. “The question is how to adapt service models in each shop to provide the best hospitality, regardless of these preconceived notions,” Sam notes.

As such, Everyman makes deliberate decisions to match this enlightened hospitality usually reserved only for fine-dining restaurants and high-end bars. Menus are offered to guests as part of the standard service interaction, rather than asking guests to hurriedly examine a menu while a barista waits expectantly. Drinks are delivered as “completed drinks,” meaning condiment bars and lids are not necessary. Lewontin, who spoke at the Tales of the Cocktail festival in 2016 about workflow between bartenders and baristas, also mentions the bar flow in Everyman’s cafés has been designed to have guests ordering from the barista and receiving and paying at the register. “This bar-first flow means everyone is more knowledgeable about what the customer is drinking and ordering, and it also promotes heads-up service. Too [often] baristas behind the espresso machine are seen as production jobs, whereas this way service engagement is intertwined with production to deliver much better hospitality,” Sam says. Many common pitfalls of café service, such as inaccurate orders or guests picking up drinks that aren’t theirs, are avoided this way.

There are even more decisions being made behind the scenes about fine details in the name of hospitality. Things like choice of serveware, facing latte art toward the guest, and how beverages are physically handed off are all important details for Sam and the Everyman team. With all of these details, consistency and standards are key. At Everyman, there is a hierarchy of actions ranked by importance. Having this system creates an environment for delivering consistent service, and takes pressure off of the server and staff with regards to questions or uncertainty as to how a service scenario should play out. Although some might imagine that having these high expectations for baristas or servers might translate into a high-stress environment for workers, having efficient work spaces and planning out lines of sight and visual cues all translate to a more relaxed and less demanding service environment for workers, which then results in better hospitality.

Often, cafés or bars hire based on a principle of choosing friendly people, then leaving the coffee or cocktail portion to be taught by the establishment. However, this short-sells the challenge of executing hospitality day in and day out. Sam aims to hire “engaging people who can do their jobs well, then teach them both hospitality and coffee.” This means that hospitality, which is often assumed to be a natural skill one is good at, is instead something that can be broken down and to some extent quantified. Therefore, it is more consistently and better presented. Not only does this to some extent relieve the emotional labor of hospitality, but Sam also mentions that too often there are standards that are inconsistently enforced. Instead of asking whether the employee is a “friendly person,” the set of standards can instead show whether or not the employee is meeting job expectations of service.

Restaurants and bars often demand high levels of hospitality as standard, whereas cafés can sometimes be seen as lower-stress environments, simply serving coffee and light food rather than offering a full experience. Bartenders are taught to serve their guests completely, from ordering and guiding them through the menu to mixing and delivering their drinks and plates and processing their payment. Along the way, steps of service are stressed that streamline each interaction and ease the workload on both bartender and guest. Similarly, servers are taught how to conduct wine service, from holding the bottle at guests’ eye level without being intrusive for examination, to open service and avoiding turning an elbow toward a table, to choice of words when greeting guests. Rather than advocating that all cafés turn into bars or restaurants, it can be enormously inspirational to examine the traditions and expectations within eating and drinking service environments.

In the following piece of this series, we expand on our focus on service with Koan Goedman, co-owner of Huckleberry Roasters and Bar Fausto in Colorado. We also continue the conversation with Sam Lewontin, shifting gears and looking at his experience as a barista competitor, and how he sees bartenders developing drinks versus baristas developing signature beverages for competition. 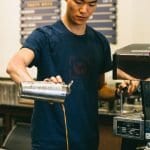