Klatch Coffee hosts an event to showcase their newest coffee—a $601-per-pound Geisha. The exclusive coffee won accolades at this year’s Best of Panama competition, and a select group got a chance to try it.

ARTICLE AND PHOTOS BY QUINTAN VALLES
SPECIAL TO BARISTA MAGAZINE

Klatch Coffee is a caffeinated force to be reckoned with in the specialty-coffee industry. Mike Perry and his coffee-centric crew aim to do one thing: share the wonders of coffee with as many people possible. And what better coffee to share than the Panamanian Esmeralda Geisha 601?

This fantastic coffee won the Best Geisha category at the recent Best of Panama event and was auctioned off for a record $601 per pound, making it the most expensive coffee in the world. To showcase this precious bean, Klatch put on a “first sip” media event to let us know what the coffee has to offer and why the public should take note of it.

The event was elegant and intimate, held on a small patio in the culturally rich Arts District of Los Angeles. Mike shared with the assembled media a bit about the coffee’s origin story and why this particular coffee is so unique. “I’ve been asked if this coffee is just novelty or if there’s really something there,” he said. “It’s not novelty; it’s really a great coffee.”

The bean comes from a very small micro-lot on the Cañas Verdes farm in Boquete, where the unique soil and growing conditions have yielded a limited but spectacular harvest. Klatch is responsible for bringing this stellar coffee into the United States.

Before the tasting commenced, two-time U.S. Brewers Cup champion Todd Goldsworthy shared his recipe for preparing the unique coffee and demonstrated his brewing process. Starting with 15 grams of coffee ground on a Baratza Preciso with the adjustment ring dialed in on the number 20, the coffee is then brewed on a Kalita Wave 155 with water heated on a gooseneck kettle to 205 degrees Fahrenheit, with a TDS (total dissolved solids) level of 107 parts per million. The coffee is bloomed at 30 ml for 40 seconds and first infusion is poured to 100 ml, followed by a brewing interval of 5 seconds and then an infusion to 150 ml. This is repeated with intervals of 50 ml infusions for a total of 240 ml, with the brewing process ending at 2 minutes and 30 seconds, yielding a 7-ounce cup of coffee.

Todd explained his recipe by saying, “With less coffee we wanted to use a smaller brewing device, and I really enjoy using the Kalita because it gives you more balance in the cup.” He added, “I like the way conical burr grinders create more complexity in the cup, and I’ve found that Geishas really do well with water at a TDS level from 95 to up to about 115 parts per million.” He concluded, “After a few tests with the amount of water we used, we found that 240 ml was really the sweet spot for this coffee.”

Todd definitely found that sweet spot. From the aromatically floral grinds to the sweet, fruity taste and juicy mouthfeel, this coffee was absolutely dazzling. Coffee enthusiasts and casual coffee drinkers alike were delighted by the complex flavors in the cup.

Meg Butler, editor of Fodor’s Travel , remarked, “I really love this experience. This is an unexpected flavor for coffee. I’ve had some great coffees, but nothing like this; it’s so fruity and floral.” Similarly, Jesse Tabit of Fodor’s Travel stated, “It lives up to the hype. Definitely a lot of fruit: grapefruit, berries, pineapple. Its delicious!”

For Mike Perry and the rest of the Klatch crew, having the most expensive coffee in the world means nothing if you can’t share it with other coffee lovers. As Mike puts it, “We want as many people as possible to enjoy this coffee, and so after this we are having an event on November 18 where people can come and we are going to prepare some cups for them. We really want the world to know how great coffee can be, how far it has come. And I think with this Geisha, you experience flavors and tastes that are unlike anything else.” 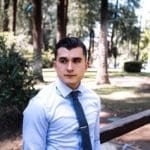 ABOUT THE AUTHOR
Quintan Valles is a freelance writer based in Southern California. He is also a relationship builder for Wild Goose Coffee Roasters and a coffee blogger. Quintan enjoys playing the guitar and maintaining an active lifestyle. His favorite part about working in the coffee industry is hearing the stories of the people who make up coffee culture—and, of course, the occasional gibraltar.

About baristamagazine 1737 Articles
Barista Magazine is the leading trade magazine in the world for the professional coffee community.
Website