For this barista-turned-nonprofit professional, everything she needed to succeed was learned behind the espresso machine.

When I got my first coffee shop job in 2002 to earn some extra scratch while I was in college, I had no idea that for the next seven years of my life, I would steam milk for stressed students, pull espresso shots for readers in the café of a now-defunct chain bookstore, and balance growing espresso knowledge with short-order cooking at an independent B Corp. I would become, in so many circles, known only as “Coffee Shop Girl.”

Now, as I sit at my desk at an arts organization, nearly a decade into my current career as a nonprofit fundraising professional, I realize that everything I needed to succeed at this job, and so many others, I learned behind the espresso bar.

Without question, the skill that saved my life during countless Sunday brunch shifts was my ability to multitask. I had to cook, assemble, and distribute dozens of bacon-egg-and-cheese sandwiches while simultaneously pinch-hitting at the bar, taking over at the register when our ringer had to use the bathroom, restocking the bain-marie, and making witty conversation with regulars waiting in line. I had to make it all look like no big deal, too, because no customer wants to see their favorite barista sweaty, miserable, covered in poppy seeds, and snapping at them to finally freakin’ decide between a latte and a cappuccino.

Now, as I juggle thousand-piece direct-mail projects, grant proposals that need staff members’ edits, and more unread emails than one person should ever see, I find myself accessing the same ability to work my butt off, make sure that not a single task falls by the wayside, and keep a smile on my face. (Well, at least until my shift is over.)

At the independent B Corp where I worked as a barista, cook, and eventually manager, I was lucky to have had an espresso trainer who was an absolute stickler for perfection and consistency. He drilled me mercilessly and made sure that my steamed milk had the perfect glossy sheen every time. He moved my wrist a quarter of a degree so the crema of the espresso would rise up with the surface of the pouring milk. And for the first few weeks I worked on the bar, even though I had been making drinks for years by then, he checked every single americano, latte, and macchiato I made.

Even though at the time, I wanted to go after him with the steam wand, he taught me that a good product will always keep people coming back to you, and that your reputation for excellence will carry you far. Even though my products have changed from lattes and sandwiches to grant proposals and infographics, and the people coming back to me aren’t customers, but donors, corporate partners, and foundation officers, the core of the lesson remains as true as ever. I carry my reputation for good, consistent work with me wherever I go.

While I was working behind the bar, I had somewhere between three and five minutes to make a great impression, create a perfect product, and give my customer a reason to come back tomorrow. I also worked to create longer-term relationships with my regulars—folks whose kids I knew, whose favorite drinks I memorized, and whose friendships I gained. Ironically, when I felt that I was ready to transition from the service industry to the nonprofit sector, my regulars were the ones who recommended me for positions and pushed my paltry resume onto hiring managers’ desks.

One regular in particular happened to work for a nonprofit that was searching for an executive assistant. On paper, I had exactly zero experience that qualified me for the job. At my interview, I told the hiring manager, “I’ve managed the busiest brunch shifts imaginable, handled a million simultaneous tasks, and worked to keep an opinionated, insanely busy, and sometimes downright difficult shop owner happy. I can handle whatever you’ve got.” That attitude, plus my customer’s glowing recommendation of me as a hard-working, friendly, and motivated person, allowed me to edge out a candidate with five years of administrative experience.

At every coffee shop job I’ve had, I always had to make magic with what was available. Whether I was creating a perfect schedule with only two trained closers (whom I didn’t want to burn out), keeping up with the latte demand when the milk order was late, or banging out dozens of egg sandwiches despite a broken microwave, I’ve always learned that you use what you have to make good things happen—and you focus on solutions.

I could have spent an hour yelling at the milk delivery guy, railing on my employees for not being willing to step up, or angrily notifying customers that they could have bagels and cream cheese for breakfast or nothing at all—but what would that have gotten me? The result would have been a bunch of angry people who wanted to get as far away from me as possible. By focusing only on the solution to each problem, and not who was to blame, I got to a better place quicker, and found a way to hold the people around me accountable in more respectful, thoughtful ways. Every single day, I’m faced with similar obstacles at my nonprofit—either we talk ad nauseam about who sent out the wrong document to the board of directors, or we get over ourselves and figure out how to fix it, now.

It would have been easy to tell myself that the years I spent in the service industry should be a distant memory, now that I’ve moved onto a completely different career, but the truth is, I wouldn’t have the career I do now without my years behind the bar. The best skills are transferable, and if you work hard enough to learn and grow, you can take them with you anywhere. 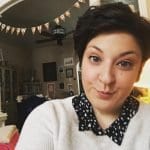 ABOUT THE AUTHOR
Rae Pagliarulo holds her MFA in creative writing from Rosemont College. Her work has been featured in Full Grown People, Ghost Town, bedfellows, New South, Hippocampus, The Manifest-Station, Quail Bell, and r.kv.r.y. quarterly, and is anthologized in The Best of Philadelphia Stories: 10th Anniversary Edition. She is the 2014 recipient of the Sandy Crimmins National Poetry Prize and a 2015 Pushcart Prize Nominee. Rae works as the Writing Life column editor for Hippocampus Magazine, and as development director for a Philadelphia arts nonprofit.