Upon entering da Matteo to attend the Barista League’s most recent event in Gothenburg, Sweden, you could immediately tell what kind of night was in store. The popular cafe and roastery in the city’s vibrant Magasinsgatan neighborhood had been transformed into a two-and-a-half-story coffee circus filled with caffeine- and beer-fueled performers and attendees. For Barista League founder Steven Moloney, this was perfectly intentional.

Steven is a two-time Swedish Barista Champion, so he knows all about the seriousness of the competition game. He wants the Barista League’s role within the coffee community to be a welcoming, fun-filled forum, and the attendees of this event would agree that it is. The competition has an informal feel, fun twists, and unexpected turns—and no entry fees. “Less rules and more laughs” is Steven’s motto. With its entertaining style, the format is audience-friendly. Baristas compete in teams of two for killer prizes and bragging rights. In Gothenburg on the evening of March 25, 13 such teams went through plenty of coffee exercises that were well outside of their comfort zone, which of course, just made the evening more thrilling.

The three rounds of the competition change for each Barista League event; the Gothenburg edition featured the following rounds:

Round 1: The God Shot competition, where competitors were tasked with making the best espressos possible in 15 minutes with a mystery coffee. The coffee provided was a washed Gesha from Hacienda La Esmeralda, which is some of the most expensive coffee in the world. Now that’s something you don’t get to brew everyday!

Round 2: This round consisted of smelling cups of various fruits and spices, blindfolded, and guessing their identities. It was not as easy as it may sound, but it certainly was as amusing to watch as it sounds.

Round 3: The cup tasters competition, but with brew variables instead of various origins. Competitors were evaluated based on how quickly they could pick up on over- or under-extraction. Would a lingering aftertaste confuse them in the heat of the moment?

The I Do’s—Camilla Pettersson and Christofer Landström, from da Matteo (Sweden)

The Danes—Rasmus Gamrath and Lukas Kragelund, from The Coffee Collective (Denmark)

After hours of amusing coffee contests, conversations with old and new friends, and lots of excitement, the top teams of the Barista League Gothenburg were crowned—with a surprise twist. Not only would the winning team—Drop It Like It’s Hot—get an all-inclusive trip to Budapest (including a fancy dinner at the amazing restaurant Innio, and more)—but the runner-up team also gets to go! Thanks, Ally Coffee, and congratulations to runner-up Steamy Wonder!

This was the seventh Barista League event since its founding in 2015, following previous events in Lund (Sweden), Helsingborg (Sweden), Gothenburg (Sweden), Antwerp (Belgium), Helsinki (Finland), and Oslo (Norway). The next events are scheduled to take place in Copenhagen, Denmark, June 12–13; and in Berlin, Germany, September 23–24. Looking to the future, Steven hopes to hold Barista League events around the world. 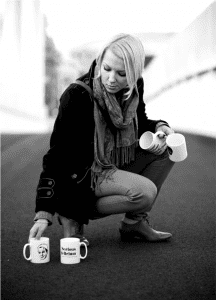 Coffee extremist, marketing strategist, and designer working with specialty-coffee roasteries in Oslo, Norway, since 2008, Ingri M. Johnsen is the manager of Kaffikaze and cofounder of the Mile High AeroPress Club. She placed second in the 2012 World AeroPress Championship, and is the head organizer of the Norwegian AeroPress Championship.