Can beer brewers become roasters? Are coffee and beer at all the same? In this series, Ben Dorrington gives us an intimate look at his transition from the beer universe to the coffee world.

(This is the last installment in a five-part series, which began last spring and is back for one final episode. If you’re new to the series, you can check out episode one here, episode two here, episode three here, and episode four here.)

As I am now a month into my three-month parental leave, I find myself reflecting on all coffee has brought me and the many fond coffee memories. These are the moments in life, augmented by coffee, that you remember vividly. Growing up where I did, with the coffee-loving parents I have, there have been many coffee-heavy moments in my life. From skateboarding along beach fronts to meeting a good friend at a Surf Life Saving club-turned-cafe, to meeting my mum between university lectures for lunch and a coffee. The first time I went out on a date with my now partner of eight years … was to a coffee shop.

Among the most notable of these memories occurred on a trip to Central America in 2014. We had spent an entire day traveling from the Mayan ruins of Palenque to San Cristobal de las Casas. En route, we visited the romantically named Agua Azul, a reportedly beautiful series of cascading waterfalls and terraces. However, due to heavy rains the night before, the gorgeous Blue Waters were more of a dirty brown. When we finally reached San Cristobal, tired and weary from numerous hours on a crowded bus, we needed accommodation ASAP. We had our trusty Lonely Planet guide in hand, along with some other suggestions for hostels. After finding the first two recommended places closed for the night, and the clock hitting 10:30 p.m. … a sense of urgency set in. The next hotel we came across had a room vacant—good enough. The Ritz this definitely was not: The hotel was rundown, stale-smelling, and definitely past its best days. The bedding was greasy, the towels hard and crusty, and the shower straight cold water. The threat of bed bugs was very real. We managed a quick six or so hours of broken sleep, stirring with every itchy elbow and bump from the hallway. When we exited our room, leaving as quickly as we could, we caught a quick view of the city that had been shrouded in darkness the night before. Greeting us were the hills of Chiapas, with terra cotta roofs and pastel buildings nestled within them.

With hunger pangs growing ever stronger, and a less-than-adequate amount of sleep weighing heavy on our brains, we needed coffee, stat. I would have settled for anything in that state, but as it turns out, the first cafe we stumbled across was some kind of heaven. We sat down at the end of a natural wood table, and everything in the space was light and open, with skylights running the length of the building and locally painted art on the walls. Soft cello music played in the background; it seemed like a scene out of a cheesy movie. Everything that needed to be there was there. The lattes that arrived at the table were possibly the best coffee I have ever drunk. Grown, washed, roasted, and served in San Cristobal. Saving the life of two tired travelers.

When I began writing this small series of stories, my intention was to chronicle the transition from being in the brewing industry to being in the coffee industry. As it turns out, for me there is no comparison between the two. I have been welcomed by so many open arms and met so many new friends in such a short period that I can confidently say this change in career path has felt effortless. Yes, there are many skills I am yet to master, and so much to learn, but it feels that much less intimidating knowing that I am a welcome part of the greater coffee family. I was lucky enough to attend the SCA Expo this April along with a few of the Discovery Coffee team. What I got out of it was the sense that the level of collaboration and energy within the industry is exploding! Everyone was there to contribute what they could to building up the industry, from better growing, washing, roasting, and brewing techniques to ways of building up the culture of coffee and supporting the health of farm workers at origin. I felt inspired and excited for the future of my new career.

Coffee, as a beverage, has so much potential to bring people together, including families, friends, and lovers. If it weren’t for coffee, would I be who I am today? I highly doubt it. Coffee has been there through thick and thin—as a tonic for a broken heart, as an accent on a friend’s success. So, thank you, to everyone who grows, washes, roasts, brews, makes equipment for, supports, and drinks coffee. You have given me so much. I hope that in the future I can pay even a tiny amount of that good energy back into the community. Cheers. 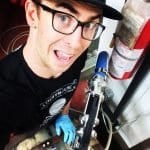