Episode One: A Back Story

In retrospect, I feel like I’ve always been destined for the specialty coffee industry. Growing up in Wellington, New Zealand, good espresso has been a way of life since the early 1990s. Teenage Ben was drinking flat whites while he was still in high school. Cafes have always been a safe and familiar space, with roasters always as distinct and unique as different breweries.

Some six or seven years ago, I started down the road of becoming a brewer. I had fallen in love with the craft beer industry in New Zealand and needed to be a part of it. At that time, brewing education was limited and hard to access. So I began volunteering. Festivals, tastings, beer dinners, etc. … every opportunity that presented itself was welcomed with open arms. Eventually I became friendly with some brewers in the industry, leading to internships at some of NZ’s leading breweries. All along, coffee was there, lurking in the background.

Fast forward a few years, and I find myself newly emigrated to Canada. My partner is from Montreal, Quebec, and, as my French is non-existent, we decided to settle in Victoria, British Columbia, the Hawaii of Canada (it’s all relative). It sure helped that craft beer and specialty coffee were plentiful! Within mere months of receiving my permanent residence, I landed a job at Spinnakers Gastro Brewpub, a Victoria institution and one of the first craft breweries to open in Canada. In a city notorious for being hard to find employment, I had walked straight into the industry. The next few years were full of making great friends, experiencing vibrant festivals, and brewing plenty of excellent craft beer. As they say, though, all good things must come to an end. After chasing what I believed to be a great opportunity at another brewery, I found myself laid off for reasons unknown.

Thus began the beginning of the end of my love affair with craft beer. Suddenly the filter had been removed, and I found myself seeing the industry in a whole new light. The joy was gone, the Kool-Aid had dried up.

With my hand forced, I accepted a job at a third brewery in a more junior position. The rent, after all, must be paid. Initially I enjoyed the work, and there was plenty of opportunity to be creative and work with some really good people. However, six months into the job, things were flipped on their head.

It was on a cold, cellar-based day that I contacted a coffee industry friend. Brittany Davies is the education manager at Discovery Coffee, a mid-sized Victoria-based roastery and cafe business, who also, as it turns out, loves her Blundstones! (Barista Magazine Dec 2016-Jan 2017, pg. 60) We had met the previous summer, talking at length about coffee, music, and culture. She mentioned that if ever I found myself looking for a change, I should drop her a line—so I did. I met her and Kara Mudry, the cafe operations GM, within a week. Conversation flowed, laughs were shared, and things felt positive and fresh. In subsequent weeks I met Logan Gray, the owner-operator, and other upper-level employees. Each new meeting felt easy and familiar, like I had known these people for years. Coffee people, it turns out, are my people.

As great as familiarity, conversation, and comfort are, they don’t pay the rent. As the father of a six-month-old baby girl, I was brutally aware of the requirement to maintain an income. My partner Jessie is still on maternity leave (paid in Canada!), but the limited nature meant that any change in industry needed to be sustainable financially. We are fortunate to have affordable rent and be fairly adept at budgeting, and after numerous nights spent discussing options and multiple budgets, it was agreed that coffee was a viable option.

I was quickly offered a position as a roaster/service tech/wholesale rep, the proverbial small business “man of many hats” role, which I accepted on the spot. This is something I have no experience in but a familiarity with, so two days from now I will very much be thrown in the deep end. I must learn as quickly as possible an incredible number of new skills in a very vibrant and specialized industry. I will experience two months of cafe operations, barista training, roastery operations, and general coffee knowledge, followed by three months off (parental leave, once again, go Canada!), then the journey of technical training that comes with maintaining the inner workings of our industry’s equipment.

Will I be accepted by the industry, as someone with no training as a barista? Are familiarity with coffee, passion, and enthusiasm enough to get me through? Will networking within specialty coffee come easily, or will I need to fight to make links? Are the beer-specific skills I currently possess transferable? These questions are, quite frankly, scary to contemplate, though important to acknowledge. I’ll likely be relying on confidence and a smile—as they’re all I really have to get me through this first week. 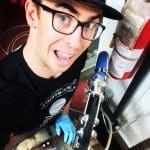