Third Wave Water made a splash after their appearance on Shark Tank. We talk to the founders to discuss what the show has done for them and what the future holds.

It’s a fact widely accepted among coffee professionals at this point: The make-up of water plays a critical role in brewing. It seems obvious—it is 98 percent of the drink after all—but until recently we didn’t give much thought to just how critical it is. As Maxwell Colonna-Dashwood made clear in his 2015 Re:co Symposium talk, differences in this deceptively simple ingredient can lead to frustratingly disparate experiences with the same coffee.

But while folks like Maxwell have brought this conversation into the mainstream among specialty-coffee professionals, Taylor Minor and Charles Nick have been working tirelessly to bring it to home brewers everywhere.

Taylor and Charles are the founders of Third Wave Water, a startup from Cedarville, Ohio, that’s challenging the idea that it’s too complicated to remove water variability from home coffee brewing. Little more than a year after launching, the company is out to prove that its concept is too simple—and too affordable—not to succeed. There are no home filtration systems involved—just a jug of distilled water and Third Wave Water powder mixed to create ideal brewing water that can be reproduced anywhere.

“The idea was created to solve the need for both of our businesses—to help our customers stop ruining the coffee we were providing them with their atrocious water,” says Charles, who also owns The Wright Cup, an Ohio-focused roaster subscription service. He and Taylor, who owns Telemetry Coffee Roasters, were discussing difficulties in translating the coffee to both of their clientele when the idea came about.

“Taylor joked that he could ‘dehydrate’ the water, and then thought to himself, ‘Wait, I can do that,’” recalls Charles. “Since Taylor had just finished building his laboratory (at Telemetry), he could easily create the initial water formula, which blew me away.”

The idea quickly took shape, leading to the launch of their “classic” profile for coffee brewing at the Barista Guild of America’s Bloom event in Chicago last fall, followed by a Kickstarter campaign and the rollout of their espresso profile in February. Despite some initial skepticism from some watchers of craft food and drink, the company has made more than a few waves in its first year, and has no plans of slowing down. Its success culminated in an appearance on Shark Tank in October, and despite doubts from several on the show about whether the idea is easy enough for the average coffee drinker, the appearance resulted in an agreement for a buy-in from Shark Barbara Corcoran.

That investment didn’t pan out due to some roadblocks in negotiations, but that doesn’t mean the show wasn’t a success. According to Taylor, the company received more than 10,000 orders in the two weeks following the Shark Tank episode, compared to roughly 1,600 in the rest of its first year of business.

“We did three times as much as she was going to loan us in three days,” says Taylor. It’s that kind of exposure, even more than the immediate surge in revenue, that he says would have been nearly impossible to get with traditional advertising. The show brought their product to a market of consumers that weren’t already thinking about the relationship between the minerals in their water and the taste of their coffee. According to Charles, many of these new customers have been pleasantly surprised with the product, despite the fact that they “weren’t really sure what to expect, or didn’t know a whole lot about specialty coffee.” Taylor described one particular customer, a longtime coffee drinker in his 70s, who was “blown away” by the cup experience with Third Wave Water.

While Shark Tank proved a great channel for that kind of exposure, Third Wave Water’s broader goal is to appeal to more traditional coffee drinkers and avid specialty drinkers alike. To that end, partnerships like the one they have formed with the artfully curated subscription service Department of Brewology have been instrumental. Department founder David Salinas was convinced of the need for a solution like Third Wave Water before he heard of them.

“I have no way of leveling the playing field,” David recalls thinking as he considered bringing coffees from roasters around the globe to subscribers all over the world. “The idea that you’re doing everything that you can possibly do to re-create a wonderful coffee experience in your home, and no matter what you do—you can buy an ‘EK’ or the nicest kettles or whatever—but the simplest variables can be the most difficult to overcome.”

That idea was nagging at David as he thought not only of consumers but of roasters who were trying to create a consistent experience with their coffee. So he jumped at the chance to try out Third Wave Water after seeing it mentioned on Instagram. “Within 20 minutes I was on the phone with Taylor,” he says. He sent a Third Wave Water sample to all of the roasters going in his subscription earlier this year, allowing them to adjust their roast profiles to the water. He then provided the powder in all of the sets, so his customers could brew with it.

“We had positive feedback across the board,” says David. Customers loved the simplicity of preparing the water and the experience in the cup. And for his part, Salinas found the price point and approachability of the product compelling enough to feature in his online store and include in all sets going forward.

Outside that more refined market, not all feedback has been positive. Articles like the one cited from Eater have made a few ripples, and some who have tried the product have been less than impressed.  “One guy called us ‘fake news,’ whatever that means,” says Taylor. Others are surprised by the brighter flavors the water brings out in their coffee.

Taylor and Charles are undeterred, however, and are instead focused on innovating and expanding their reach. As they’ve continued to connect with a wider variety of customers, they’ve honed in on other problems in need of solutions. Next up is a powder designed to make coffee easier on the stomach (and on the palate for some) by modulating the pH value of brewed coffee.

Other plans for the company will bring the partners back to their core motivation: to equip coffee people. They’re in the process of a designing a commercial filtration system in partnership with the University of Dayton, and their goal is to build a system that can filter for multiple café applications at once, creating different water for espresso and brew bar. Beyond that, the aim is to focus on developing more wholesale partnerships with subscription services, roasters and cafés, and there may one day be a “barista pack” of different formulas for brewing in the shop.

“The goal is to help specialty coffee in general be more successful,” says Charles. “We want to equip those people in the speciality industry first.”

So far, many in speciality, including David, think it’s working. “It’s not a gimmick,” he says, “it’s a real solution that can improve the customer experience.” 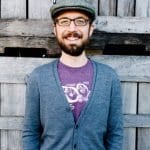 ABOUT THE AUTHOR
Luke Daugherty works for Quills Coffee in Louisville, Ky., where he wears many hats, including greens purchasing, finance, and business operations. He has been in the coffee industry for more than 13 years, working as a barista, roaster, and café manager along the way, all the while growing more intrigued with this lovely beverage we all can’t get enough of. He’s an SCA-certified green coffee buyer, and he lives with his wife and three children in Louisville.