This past Memorial Day, professionals in the coffee and beer industries gathered for SheBrews, an afternoon of education, networking, and empowerment.

SheBrews is a concept that presented itself at an after-party for the United States Barista Championship qualifying event in Austin, Texas. Randi Hensley (director of operations for Epoch Coffee) and Emily Jackson (of A Better Cup Consulting) had a conversation that lasted hours after the party was over. Both women agreed there seemed to be something missing: a place for women to gather in the male-dominated craft beverage industries. Even with plenty of industry events occurring, there was a noticeable lack of space for women to take part on equal footing with their male colleagues.

The SheBrews Symposium was created as a way for them to take the temperature of the room. The event focused on exploring the intersection of the craft beer and specialty coffee industries. Joining Randi and Emily were coffee professionals Allison Kissell (general manager, Caffé Medici), Britt Allen (coffee educator, Wright Bros Brew & Brew), and Raechel Hurd (coffee educator, Epoch Coffee—and the writer of this article). Together, these women planned to bring coffee and beer professionals under one roof to create a space for skill sharing, networking, and discussion.

Attendees grazed the tasting booths and then broke into groups to rotate through guided sensory workshops. Cicerones Lindsay Compton (server, Uchiko) and Brandy Compton (server, Barley Swine) led the beer sensory workshop. Using a flavor wheel that echoes its coffee counterpart, these Cicerones took their groups through a brief history of beer, followed by an introduction to beer tasting vocabulary. A reference table sat next to the groups, containing examples of defects, aromas, hops, grains, and malts utilized in the beer making process.

Coffee educators Emily Jackson and Raechel Hurd led the coffee sensory workshop. Each attendee consumed a sour cherry candy with their nose plugged, identifying the differences between the olfactory and gustatory systems. A blind coffee tasting and food pairing exercise allowed the group to re-evaluate their sensory vocabulary. Participants found many connections between the sensory vocabulary of coffee and beer; these connections led to curious and thoughtful dialogues.

While these workshops occurred, Randi and Allison held an interactive activity outside on the patio. This icebreaker aimed to identify topics that attendees wished to see covered in future events. The issue of diversifying the workplace was brought up on several occasions. It is important to note that the SheBrews Symposium was a stepping stone for future events, and with many ideas brought forth during the interactive discussion, this event will be the first of many more to come.

The symposium ended with a panel discussion featuring heavy hitters in their respective industries. The lineup included: Corina Guillory (owner, CoffeeSock), Erica Foster (owner, Flitch Coffee), Jill Fountain (co-owner, Macchinisti), Rachael Hackathorn (taproom and events manager, Zilker Brewing Co.), Sheila Garcia (director of sales and marketing, Hops & Grain Brewing), and Averie Swanson (head brewer, Jester King Brewery). These panelists addressed a multitude of questions asked by moderator Emily Jackson, including: “How do you promote a forward and healthy environment for your staff?” and “Have you been in a mentorship role? How would you envision being a mentor if that opportunity presented itself?” While some panelists had concrete mentors in their industries, others had to forge their own paths. We learned that there is more than one way to become successful in our industries, but a broader takeaway is that hard work and knowledge are powerful tools, regardless of the obstacles placed before you. These are difficult questions, many of which have no clear and easy answers. This is why we need to create room for women to explore these questions.

As the panel gathered momentum, it seemed as if it was time to wrap things up, but attendees continued to explore their challenges and triumphs in the social hour after the panel. This allowed for even more discussion among the audience, who demonstrated a hunger for more information and dialogue equal to their passion for their industry and careers. 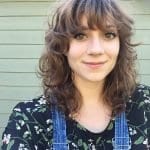 ABOUT THE AUTHOR
Raechel Hurd is a coffee educator at Epoch Coffee. She splits her time between rock climbing, hanging out with dogs, and watching latte art pours on Instagram.