Tamper Tantrum travels across the ocean to San Francisco, inviting speakers to discuss feminism, climate change, and the appropriation of food and images of coffee farmers.

The 15th Tamper Tantrum event was held in San Francisco at Github’s South Beach headquarters on Saturday, Sept. 9. Tamper Tantrum—a mixture of podcast, video content, and live events—attempts to bring together forward-thinking and inspiring speakers to highlight areas of expertise within the specialty-coffee industry. With help from hosts Wrecking Ball Coffee and Chemex, regular Tamper Tantrum host Stephen Leighton (of Hasbean Coffee) and guest host Katie Carguilo (of Counter Culture Coffee) warmed up the stage and welcomed the attendees after we had enjoyed Chemex coffee from Hasbean, Drop Coffee, Intelligentsia, Madcap, AKA Coffee, and Sweet Bloom.

The first speaker was Hanna Neuschwander from World Coffee Research, who asked us to think of the year 2050. She shared that with the current growth of the specialty-coffee market, by 2050, we will need to double world production of coffee, while suitable land will decline by half. This puts coffee agriculture at a crossroads.

Hanna contrasted the extreme challenges of climate change, the decline of profitability for farming, soil depletion, and coffee leaf rust disease with the exciting opportunities of the future. Agriculture research and development are creating new technologies that can be used to increase quality, yields, and profitability. Hanna encouraged us to keep our minds open, as we may see dramatic changes to coffee agriculture in the coming decades.

The second speaker, Professor Bill Ristenpart, is the director of the UC Davis Coffee Center. Because UC Davis is already a world leader in many culinary areas, its branching out into coffee was a no-brainer. At Davis, Bill uses coffee to teach chemical engineering, and he explained at Tamper Tantrum that many things that baristas do every day to extract coffee are actually solving complex equations. His lecture waded incredibly deep into the coffee nerd stuff that so many of us love.

The third guest speaker was Alejandro Martinez of Finca Argentina in El Salvador. He spoke about the direct trade model and outlined the potential challenges that origin countries are facing. He spoke of the lack of interest in coffee shown by potential younger farmers, as well as the rising cost of production and fluctuation in the C-market. Despite these risks, Alejandro explained that specialty coffee has become the reason that he has not sold his farm.

When it came time for questions, it was clear that the audience was well-informed on the basics of direct trade and had questions about some of that model’s blind spots. An audience member asked, “Are you ever worried that a buyer will leave you since you have no contracts?” Alejandro cited relationships and trust as the main tenants on which he does business on. However, many producers have been taken advantage of with the direct trade model, and the profitability of a farm often depends on how much privilege and access to global trade markets a producer already has.

Trish Rothgeb, co-founder and co-owner of Wrecking Ball Coffee, lectured next on the similarities of the waves of coffee and the waves of feminism. Trish coined the term “third wave coffee,” and her lecture jumped around between the three waves of coffee and the three waves of feminism. Because the talk was not in chronological order, the two movements seemed to meld together, demonstrating similar themes in both. The climax of her speech came when Trish defined the term intersectionality as “legally challenging the notion of oppressive institutions” as it relates specifically to black women, crediting this definition to its originator, Kimberlé Crenshaw. Trish stated that intersectionality in coffee means examining race, gender, economic power, political unrest, and climate.

After another coffee break, Pim Techamuanvivit took the stage with Stephen and Katie to talk about her Michelin-star restaurant, Kin Khao. “I opened a restaurant without Pad Thai because I’m not cooking Thai food for white people. I’m cooking food for me,” she noted. She responded to food media in general by saying, “Thai food deserves the same respect as French cuisine. Ethnic food does not have to be cheap. I’m not elevating Thai cuisine, I’m doing it justice.” Pim’s assertion of the worthiness of Thai cooking drew a sharp contrast to many food writers’ dismissal of specifically Asian food and set a new standard to center underrepresented cuisines.

The final segment of the day was a debate. The proposition was: “Using images of coffee producers and their communities in our marketing is exploitation.” Katie and Colleen Anunu, senior manager at Fair Trade USA, argued the “for” position, while Stephen and Mayra Orellana-Powell, marketing and outreach director for Royal Coffee, argued the “against” position.

Katie and Colleen argued that a green buyer has tremendous power that can be difficult to navigate when one takes a photo of a producer, farmer, or picker. “Images don’t really bring people out of the margins. They don’t in and of themselves give people agency. They don’t give people resources or the social and political capital that they need,” Colleen said. Mayra, who is also a producer from Honduras, said that pictures of producers in marketing can show their culture. Stephen, who has recently written a book with several pictures of coffee producers in it, said: “I don’t buy from anyone who isn’t my friend, and I don’t want to exploit my friends. Maybe it is my naivety that keeps me from seeing the imbalance.” Katie said that when we share photos of producers, we are not sharing their story—we are sharing our version of it. She posed the question: If photos of producers are so valuable to selling coffee, then why aren’t we paying producers for them?

The mood in the room was very intense. When the opportunity came for the audience to ask questions, several hands shot up. Some asked about how to give producers more agency, while others asked if it was the duty of larger coffee buyers to steer away from marketing models that have the capacity to be easily exploited. In the end, the “against” position officially won the vote of the audience in a slim margin.

This iteration of Tamper Tantrum had audience members on the edge of their seats. Much of what was brought up has been taken to the online forum of #coffeetwitter, Facebook, and numerous bars around the city. There will be much more generated from this event in its aftermath. 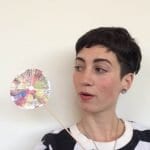 ABOUT THE AUTHOR
Jasper Wilde is a coffee educator at Ritual Coffee Roasters in San Francisco and the Board Secretary of the Bay Area Coffee Community. Jasper is a social justice activist and is the co-host of Boss Barista, an intersectional feminist coffee podcast.