Philly baristas join the discussion regarding the decision to move forward with international competitions in Dubai in 2018, and ask questions of SCA Director Mary Tellie.

Baristas in several major cities across the United States (including New York, Washington, D.C., Seattle, and Portland, Ore.) have been hosting coffee town hall meetings to discuss the recent decision by World Coffee Events (WCE) and the Specialty Coffee Association (SCA) to host international coffee events next year in Dubai, United Arab Emirates, as well as the fallout surrounding the SCA’s decision to institute the Deferred Candidacy Policy (DCP) in response.

Around 25 concerned coffee professionals in Philadelphia convened their own town hall on Monday, November 20, hosted by Joe Coffee and coordinated by Kendra Sledzinski. In order to facilitate direct conversation between SCA members and the board of directors, SCA Director Mary Tellie attended and responded to questions from those attendees who expressed concerns over the board’s role in implementing the Deferred Candidacy Policy.

To help set the tone for the evening, opening remarks were given by Em Halpern, a trans person recently fired from their job at a Philadelphia coffee shop after having reported workplace harassment. Em noted that Philly’s meeting to discuss the DCP coincided with the Transgender Day of Remembrance, and later brought up that decisions like the DCP are “indirectly discriminating against the trans community.” And while the United Arab Emirates is a destination known to be hostile to the LGBTQIA+ community, the World Coffee Events board awarded a contract to host coffee events in Dubai, effectively putting competitors and attendees in marginalized groups at risk.

After many SCA members expressed dissatisfaction with Dubai as a host site, the SCA board of directors sent out a survey requesting feedback, and a Dubai Review Board was created. Of an organization of over 10,000 members, the SCA directors received only just over 500 replies. Many SCA members in attendance at Philadelphia’s town hall meeting do not recall ever taking a survey, let alone receiving one. And at no point did the SCA Board of Directors ever consider that 500 responses may not be enough to effectively represent the interests of those for whom they are elected to serve. Nevertheless, the decision was made that people of at-risk groups who felt as though travel to Dubai was out of the question could apply for deferment.

Many at the meeting considered the directors’ decision to be a clear sign that the board had no idea about the concept of outing, and that Philadelphia as a young and growing coffee community had no voice to help express the concerns of those most at risk. “Their decision is probably well-intentioned, but uneducated,” Em said. “The board needs some education of what it’s like to live as a minority individual because a lot of people on the front lines are minorities.”

Other baristas who are new to SCA, competition, and the coffee community writ large are unsure of what they may have gotten themselves into. A few expressed frustration and disillusionment with competition, or even potentially becoming a member. “I feel defeated before the [competition] season really started,” said T. Ben Fischer, a barista at Elixr Coffee Roasters. “Why did it have to get to this point?”

SCA Director Mary Tellie had her back literally against the wall for much of the conversation, though she was explicit in her desire to listen and absorb as much feedback as possible. Mary attempted to break down the decision-making process that the WCE and the SCA board made in the days after the initial backlash against Dubai, but many of Philadelphia’s baristas were skeptical. Pressed on the reason the SCA didn’t just simply withdraw Dubai from contention, Mary said that there are many things still under review and that nothing is off of the table. The financial terms of the contract that Dubai extended to the SCA are confidential, but many found the overall lack of transparency disturbing, including Mary herself. She remarked that while no one acted outside of their role, the merger of the SCAA and SCAE created a flawed list of characteristics to select host sites.

“Sometimes we’re a little ahead of our skis,” she said.

The coffee community in Philadelphia sees this as an opportunity for ongoing discussion, and has agreed to meet at a later date to pursue potential solutions for decisions going forward. 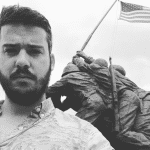 ABOUT THE AUTHOR
Kevin Smith is a quality control manager and roaster for Ultimo Coffee. He’s also a writer, chronic student, and Marine Corps veteran living in Philadelphia.