This year, the WAC expanded the regional AeroPress competition to include nine regional events all across the nation. We take a peek into some of our favorite regionals in anticipation of next week’s national championship.

This week wraps up the last of the regional AeroPress competitions, with barista pros and amateurs alike pressing down and presenting their best AeroPress recipes in San Francisco tonight. This event, hosted by Equator Coffees & Teas, will be the last of nine regional events, a new format introduced this year by the WAC—the hosting body of the World AeroPress Championship and various regional and national contests across the world.

At the heart of the new format was a desire to make competitions more accessible to a wider range of baristas and coffee enthusiasts alike. Unlike barista and Brewers Cup competitions (which have seen their own recent revamp geared toward inclusivity and accessibility), entrance fees are low and folks wishing to attend and root on competitors can usually come to the event for free. “What we really want people to know about these competitions is that they should be fun. We want the AeroPress competitions to have more of a throwdown feel—anyone can enter, participate, and have a good time,” shares Tim Varney, one of the founders and organizers of the WAC.

Below are a few of our favorite moments from some of the regional competitions, along with a full list of the winners of each competition. The nine winners will receive an all-expenses-paid trip to Seattle to compete in the U.S. AeroPress Championship, taking place September 6 in Seattle and hosted at the La Marzocco Café with coffee provided by Coffee Supreme. And, believe it or not, there are still a few wildcard spots for interested brewers to attend!

Scott Flamm took the top prize (and the award for most genuinely surprised when he won!) at the Billings AeroPress Competition, hosted by the Montana Barista Jam and MoAV. Photos of this event are courtesy of Jeff Hosa.

The same weekend baristas were brewing up in Billings, coffee pros were pushing down in Washington, D.C. The AeroPress competition there was hosted by Coffee District, with Reggie Elliott, regional barista trainer and quality assurance associate for La Colombe, finishing on top. Photos courtesy of Farrah Skeiky. 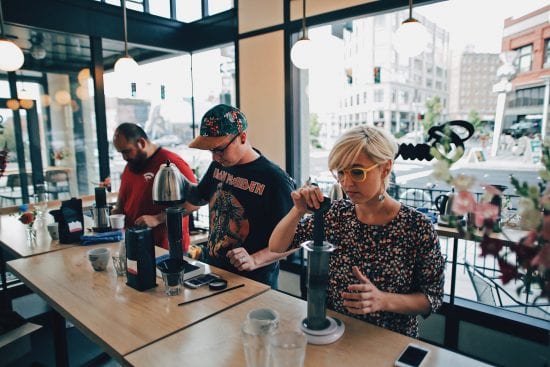 Across the country on the same weekend as the Bellingham competition, Tampa, Fla., played host to another regional competition. Flamingoes and palm trees scattered the competition, which was hosted by Good News Coffee Blog. Brennan Rodriguez took the top prize, and photos (including the cover photo) are courtesy of Phillip Schiller.

Here’s a list of the regional winners moving on to the national championship in Seattle:

The winner of the San Francisco regional will join these folks, and you can too! There are still a few wildcard spots left in the national championship in Seattle! If you think you have the guts to join the nine regional winners, or at least the desire to brew coffee and have a good time, take a chance and enter! Worst case scenario: You’re out a few bucks. Best case: You win a trip to Seoul, South Korea, to represent the United States at the World AeroPress Championship!