Stephen Hall, co-founder of Tinker Coffee Co. in Indianapolis,  reports on his experience at the Amsterdam Coffee Festival, which included competing in the newly formed Coffee Mixologists competition.

When I first learned about the brand new Coffee Mixologists competition happening at the Amsterdam Coffee Festival, which took place March 10-12, I was immediately intrigued and got right to work. We have a richly sweet and jammy naturally processed Maracaturra from Byron Corrales of Finca Los Pinos in Nicaragua that I knew would be a perfect cocktail base. Once the coffee was dialed in as a cold-brew concentrate, Mike Schrader of Indy’s Garden Table restaurant brought his ideas forward to complement the coffee with tequila, spiced pear liqueur, orange bitters, sweet vermouth, and rosemary sage simple syrup. As we were crafting the drink, the winter here in Indianapolis felt a lot more like fall, and the drink perfectly captured the sweater weather we were experiencing.

After submitting our entry video and getting the good news that we’d been selected to compete, we got to work on the logistics of our trip. In the first round of the competition we would be required to produce the drink exactly as we had in our video, which meant we needed to bring all our booze, coffee, and gear across the Atlantic. We packed everything we needed in a few suitcases and headed out on a redeye to Amsterdam!

We arrived and got straight to work. Since we’d be using a 24-hour cold-brew concentrate in our signature drink, we were in a race against the clock from the minute we landed. Thanks to the super-friendly staff at our hotel, we were able to track down a home goods store to grab a few last-minute items we needed for our cold brew.

The next morning and first day of competition came quickly, but we were prepared. After checking out a few of the first-round presentations, Mike and I headed to a café to strategize a bit. We had all our talking points nailed, and were confident in our ability to produce an exceptional drink. As our time to compete approached, we headed back to the venue for final prep. Backstage, we organized our gear, glassware, spirits, got mic’ed up, and were ready for our big debut. Our routine went exceptionally well, with both Mike and I working seamlessly to organize our bar area, craft our beverage, and tell the story of how Lord Byron (the name of our cocktail) came to be.

For a little bit of background, the Coffee Mixologists competition was organized into four competitive rounds, with each round presenting new and unique challenges for the competitors. In the first round, each team would be responsible for recreating the drink they submitted in their entry video, with 12 minutes available to prepare the drink and three minutes to present the drink to the judges. Each team would be scored independently during this round, with the top eight teams moving on to the quarterfinals. This was actually the first year of the Coffee Mixologists competition! Coffee Masters has been happening for the past several years in New York and London, and Coffee Mixologists was an offshoot of those competitions.

Recreating our signature drink live on stage presented a few challenges (namely making sure we had our cold-brew recipe dialed in), but we were well practiced and extremely comfortable sharing our approach to the cocktail with the judges. For our presentation, we focused on the story behind the coffee—why we chose to use Byron’s coffee for the drink (rich jammy sweetness), why the spiced pear liqueur works so well with the coffee (complex sweetness + spice = always a winner), why tequila is the perfect complement to the other flavors in the cocktail, and so on.

After a few agonizing hours following our initial presentation, the judges were ready to name the teams moving on to the quarterfinals. When the scores were announced, we were absolutely thrilled to learn we had placed third overall and were moving on to the next round!

The quarterfinals would feature a bit of Top Chef-style cocktail presentation, with a mystery basket containing six items presented to each team. The only rules of the second round were that we needed to use at least two of the mystery ingredients and one of four available coffees from Lot Sixty-One. The coffees offered a wide range of flavor profiles, with two Costa Rican lots from Finca Toño (washed and natural process), an El Salvador lot from Las Nubes, and a Colombian lot from Jaiber Joven.

As we took the stage and our mystery cart appeared, our minds started racing as we worked to quickly strategize our drink and get to work. Sitting on our cart were vanilla beans, cardamom, lemon, nutmeg, cinnamon, and star anise. Mike is a huge fan of Fernet and mezcal, so we started to build the cocktail around the espresso and those spirits. I took to the espresso machine to pull a few shots, and Mike assembled his ingredients. As the drink came together, we knew we were in for a challenge in the second round. The Dutch team we were competing against (Rob Clarijs & Alberto Matallana) were wearing matching Hawaiian shirts and putting together what sounded like a delicious Tiki-style drink, definitely scoring them bonus points in the ‘flair’ category. We finished our drink by combining and shaking the espresso, Fernet, mezcal, dry Curacao, orgeat, lemon, and cinnamon over ice, producing a tart but sweet drink with a subtle spiced finish. We were proud of the drink, but our fate was in the hands of the judges now.

As the night came to a close and we waited for the results to come back from the judges, we reflected on our time in Amsterdam and the competition experience (a first for both of us). Not only was the event extremely well organized, but a ton of fun. The competition was intense during each presentation, but the camaraderie and shared experience between all competitors built quick friendships. Competing in Amsterdam gave us some extra confidence to continue competing here in the States, and feeling the pressure of crafting a drink from scratch in 15 minutes will pay dividends in our next competition.

The excitement in the room reached a peak as the judges returned from their deliberations, and we made our way to the stage to learn our fate. Decisions in this round were made purely on head-to-head results rather than scoring, but we fell short in our quest for the title and were knocked out in the quarterfinals. While we were disappointed in the results, we both knew we had accomplished a ton to even make it that far, and immediately started discussing our plans to continue experimenting with coffee-based cocktails back in Indiana. We’d like to offer our deepest thanks to the people of Amsterdam, all the competitors, the festival organizers, and everyone we met along the way for their kindness and hospitality, and we hope to return to compete again next year!

Combine all ingredients in a Yarai glass. Fill with ice and stir. Serve in coupe glass with a lemon zest. 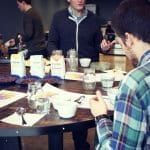