DMV Coffee hosts a town hall in Washington, D.C., as part of a series of town hall meetings aimed at bringing baristas together to discuss the SCA’s decision to host world coffee competitions in Dubai, United Arab Emirates, in 2018, and their Deferred Candidacy Policy.

On Friday evening, November 17, a number of coffee professionals in Washington, D.C., met at the Potter’s House to process and discuss the Speciality Coffee Association’s (SCA) recently released Deferred Candidacy Policy (DCP) in response to the decision to continue on with a slate of international coffee competitions to be held in Dubai in 2018. Nine people shared their thoughts on what they see as some of the major issues with both the policy and the SCA. The meeting was relaxed, measured, and aimed toward moving forward with inclusivity and positivity. Overall, those in attendance shared that they felt that the SCA’s Deferred Candidacy Policy was on the whole inadequate, tone-deaf, and reactionary.

For Reggie Elliott, the lack of transparency in the SCA’s decision-making is a major problem. It leaves members in the dark on how event sites are chosen and how money is used. The group also recognized that Seoul was the first time an international event was held where everyone who qualified was able to attend. This illuminated issues in addition to the immediate concern for LGBTQAI+ members of the coffee community by casting light onto other existing barriers to world competitions, whether it be issues of nationality or other factors that prevent people from participating. The group saw a real need for both transparency from the SCA board and a solid metric for selecting sites, noting that problems exist in hosting world events in the United States as well.

Just about everyone in the group expressed frustration with the SCA board’s short-sightedness in issuing the DCP. Whether in the policy’s timing or the lack of diversity on the board, the group felt that the SCA is clearly out of touch. The group felt this lack of diversity on the board is not reflective of the coffee community at large, and that the DCP demonstrates a lack of interest in engaging with the community in a sincere way. An obvious fix would be to seek meaningful diversity on the SCA board, where they can be exposed to and held accountable to a broader range of opinions and experiences.

Both Adam JacksonBey and Daps Salisbury echoed that the DCP felt reactionary and ill-timed. JacksonBey clarified that, in a vacuum, the necessity for the policy makes sense, but ultimately he found the delivery, content, and timing lacking. Aside from the issues already expressed from both that evening and in the U.S. coffee community at large in other town halls and online, JacksonBey expressed concern for what exclusion, whether self-imposed or otherwise, would do to the competition field. A main concern is that despite the many efforts to diversify competition, this policy only serves to limit it again. More inclusion means more meaningful and complete competitions, pushing us further as a profession.

In discussing what shape dissent of the DCP should take, those gathered wanted to formalize a show of solidarity in the form of a lapel pin or something to wear while participating in the upcoming SCA events in Reno, Nev., and New Orleans. There is a current effort by a couple of local baristas to have an enamel pin made with a positive message of both inclusion and dissent to share with the coffee community at large (stay tuned!).

In the end, what came out of this meeting was a desire to see the professional coffee landscape be more inclusive and accessible. Beyond the scope of DCP’s inability to address the very real concerns of marginalized people in a helpful way was a lingering sense that competitions in general need to be inclusive of both identities and incomes. Noting the costs associated with competitions, the people gathered were inspired by both WINCC (Women Investing in Northwest Coffee Champs) and other coffee professionals willing to help more people get involved with competition by providing  financial and coaching support. The movement toward more inclusion and a desire to promote different voices is strong in the D.C. coffee community, and we hope this will translate into tangible outcomes to this end. 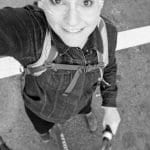 ABOUT THE AUTHOR
Sarah Rice Scott is a manager and barista at Peregrine Espresso in Washington, D.C. She is a recovering librarian and likes to make coffee in the woods.

About baristamagazine 1805 Articles
Barista Magazine is the leading trade magazine in the world for the professional coffee community.
Website