Since 2005, Cafe Grumpy has quietly expanded its retail presence, with its unmistakable frowny-face logo now adorning two Brooklyn locations and six Manhattan cafes. The newest Cafe Grumpy location, opened just weeks ago, is housed in Manhattan’s Financial District. While the retail chain’s expansion had been relegated to the New York City area, that changed in early February with the announcement that Cafe Grumpy will open its first cafe in Miami this summer. Why would a New York-rooted coffee business set up shop in sunny Florida? Barista Magazine talked to Cafe Grumpy co-founder Caroline Bell for the details. 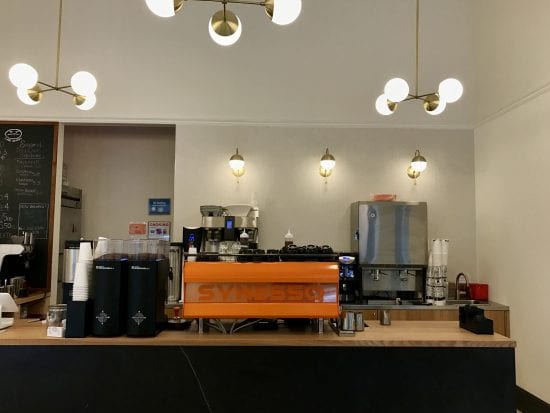 Chris Ryan: So what drew you to Miami?
Caroline Bell: I had a couple friends move there, and I just started thinking about Miami. I feel like a lot of people from New York vacation there, and they’re always back and forth—it’s kind of the next city they go to after New York. It didn’t seem like there was all that much going on with specialty coffee. There are more traditional coffee shops there with Cuban coffee and things like that, but we thought there was an opportunity for a different kind of coffee shop to open up. Also, whenever we’ve been there and ordered coffee, it’s taken a long time to prepare. And I know things are more slow-paced there, but we wanted to find a neighborhood where people are more in “work mode” so we could bring some of that New York speed to the coffee service.

CR: What neighborhood will you be in, and what was the process of finding the location?
CB: We’ll be in Coral Gables. We actually looked for a couple of years. At first it was fun going down there and looking around, but then it got frustrating. We bid on a couple spaces we didn’t get, and there were a couple other places that didn’t work out. We finally found a spot that we really liked in Coral Gables, and we immediately thought the neighborhood would be good for coffee because we actually saw people walking around with coffee cups (laughs). They weren’t driving, getting out, getting coffee, and getting back in their car. In this neighborhood it seems like people are working, taking coffee breaks and lunch breaks, and walking around. So it seems like a good move from New York to there.

CR: Panther Coffee has made big strides in establishing a specialty-coffee scene in Miami, while Blue Bottle has announced plans for shops there and Counter Culture Coffee is opening a training center. What’s going on in Miami?
CB: Yeah, things move pretty fast—once people start going into a space it seems like everyone goes there. It’s definitely not as dense as New York obviously; right now New York feels a little over-saturated. But we’ll see how it goes. It’s definitely going to take more planning than our other stores—you can’t just hop on the subway and get there, which is what we usually do.

CR: What will the expansion look like logistically?
CB: To start we’re going to be shipping coffee to the store in Miami. We ship coffee to wholesale accounts outside the city, so it won’t be that much different. We’ll also be sending some people from New York to live there, and then we’ll start to hire locally. But we still have to do the buildout first—it’s in pretty good shape, so hopefully it won’t take that long. We’re hoping for a summer opening, but it always seems to take longer building stores out than anyone thinks. I’m always tentative with my open dates so I don’t get disappointed.

CR: Do you expect to open a roastery in Miami as well?
CB: That would be a longterm goal. Ideally it’d be nice to roast there because we’d like to eventually expand our wholesale and cold brew bottled beverage line down there.

CR: Finally, now as you expand to a new market, do you have a business philosophy that’s guiding this growth?
CB: We’re still independently owned and operated, so we have to think really carefully about our growth—we put the money we make at the stores back into growing the business. With opening a store in Miami, we really just wanted to go into a neighborhood where coffee was part of the daily routine. Because we know that to actually make this work, we need people to come in and buy the coffee. But generally, we just try to be nice to people when they come in and make it feel like they have a place they can go. We try to be transparent and open—if people ask questions, we answer them as honestly as possible. That’s worked so far, so we’ll see what happens.

About Chris Ryan 235 Articles
Chris Ryan (he/him) is Barista Magazine's online copy editor and a freelance writer and editor with a background in the specialty coffee industry. He has been content director of Sustainable Harvest and the editor of Fresh Cup Magazine.
Twitter