The Redlands location of Augie’s Coffee will be forced to move after their landlord gave the business three weeks to vacate without explanation.

After almost 10 years in their iconic “little red building,” Augie’s Coffee will no longer be the hub of Downtown Redlands, California. They announced their plans to move on their Instagram page on Wednesday, May 9.

The landlord who owns the small building has decided to evict Augie’s by the end of the month “without cause or proper notice.” Augie’s wrote that they are “working very hard at the moment on a new location in downtown, while also working very hard on our locations in the Sprouts shopping center in Redlands and the Food Lab in Riverside.” All of their current Riverside, Temecula, and Claremont locations will stay open

“We recently found out that our landlord is evicting us with no cause or explanation,” shared Blair Smith of Augie’s Coffee. “We have two to three weeks hopefully to build out a future location … all the while in the middle of two other build-outs to open within the next two months.”

The baristas at Augie’s have been satisfying Downtown Redlands with everything from mint matcha drinks to vegan concha bread, and recently participated in the U.S. Coffee Championships in Seattle, with two baristas placing seventh in their competitions.

Augie’s is beloved by the Inland Empire community for serving excellent coffee and being a haven for weary students, an inspiration to local artists, and a place for locals to catch up with friends and loved ones. Notes of support and disbelief poured in immediately after the announcement. One commenter wrote that after getting married in Big Bear, the newlyweds stopped at Augie’s to get coffee before driving back to their home in San Diego. Augie’s has also been an important part of Redlands’ art scene for years, sponsoring Art in the Alley, which then grew to become Art Walk.

“Their cold brew slushie I had last summer blew my socks off,” wrote another Augie’s fan. “I’ll follow them anywhere!”

The café has set up a GoFundMe page, but doesn’t seem to have much hope of hanging on to their little red building—the donations will simply go toward offsetting the costs of closing and helping baristas in their transition. It seems the only thing that will allow Augie’s to stay in their quaint Redlands rectangle may be legal action. 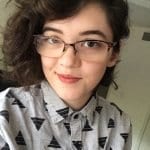 ABOUT THE AUTHOR
Alex Brown is a writer and student currently living in Atlanta. You can reach her on Twitter @violinwitch. Some of her best friends are baristas.