In this series, Rachel Northrop explores how producers can learn from one another. In part two, she highlights a recent producer trip that brought growers from Brazil to the Nariño region of Colombia.

To read part one of this series, click here.

During the recent producer-to-producer exchange sponsored by Atlantica Coffee and EMATER-MG in Brazil and facilitated by Ally Coffee and sourcing partners in Colombia, five coffee professionals from the state of Minas Gerais had the opportunity to learn firsthand what it’s like to produce coffee in Nariño, Colombia.

The first host in Colombia was Pablo Guerrero of Finca El Obraje, outside of Pasto in Tangua. An architect by trade, he originally planted his property with coffee only after the bottom fell out of the domestic wheat market and apples proved too hard to manage post-harvest. Tangua is generally considered too high to be a coffee-growing area, but Pablo’s coffee thrived. On his farm, the conversation centered around lot planning, irrigation, fertilization, and pruning.

At El Obraje’s small wet mill, the group from Brazil marveled at the depulping equipment and large tanks for washing. Their main question was, “Isn’t water used to sort out low-quality floaters? You have tasty varietals growing in amazing soil above 2,000 meters—even your floaters will taste great. Why are you washing your coffee?”

To Colombians, the question of, “Why do you wash coffee?” might seem comparable to the question of, “Why does it rain?” Sure, there’s a technical answer, but mostly it rains because it just does, and Colombia washes its coffee because Colombia sells washed Colombian coffee. This conversation was illustrative of much of what drives coffee agricultural practices: Things are done a certain way because that’s how they’ve pretty much always been done, and it takes a catalyst to prompt people to ask themselves, what’s our goal here? Is there a better way to achieve it by doing something differently?

Pablo explained the benefits of washing coffee to, yes, sort out floaters, and also to create a clean, uniform flavor profile. The next farm, Finca El Paraiso belonging to Jose Gomez, director of the Cooperativa de Cafes Especiales de Nariño, processes almost all its coffee as honey, depulped and carried straight to raised drying beds under a solar drying structure. Jose’s answer to the question of, “Why wash great coffee?” was, “Don’t.”

As Jose tweaks the process of Paraiso’s honey micro-lots, rotating lots from bottom-level beds to top ones during of the drying period, he teaches co-op members to do the same. Several hours up the mountain outside the town of Buesaco, where the cooperative has its main office, cupping lab, and warehouses, Jose works with coffee producers in the town of Aponte to process their own coffee, also as honey micro-lots.

At each farm, the group from Brazil snapped photos and recorded videos of the movable components of the drying beds. Ruggero commented, “I’m going to take these back to show to everyone who works in coffee on our farm. We could do this. But I only sell coffee in 1,000-pound super-sacks. If I wanted to sell honey-processed specialty coffee, I would have to get some of those small (70kg) bags, wouldn’t I?”

Ruggero is originally from outside of Verona, Italy, and has only been administering the farm started by his grandfather for the past year. He added a European perspective, always comparing the way products are perceived and sold in Europe with the realities of farming. “In Europe, everyone talks about sustainable and fair and all that, and then I got to Brazil to work and I saw how there were a lot of nice things everyone could tell themselves when they didn’t have to look at all that goes on to bring them their products.”

Ruggero, Celso, and Wallyson all had videos and photos of their farms on their phones, and Jose encouraged them to, “Show us again that video of the mechanical harvester!” Colombian producers leaned in to watch the rolling tractor harvest rows of cherries. One of Wallyson’s main questions was how producers could possibly afford to harvest selectively year after year with all the labor it entails. “In Brazil we could never do that,” Wallyson said. “I think here they might one day be in the position we’re in, where the cost of labor will be too high to be picky about only red cherries. Their terrain is different, but I think they too will have to think about other systems for harvesting if they want to stay in business.”

While the trip was focused on agriculture, there were opportunities to drink coffee, which were as valuable as seeing it grown. In Aponte, Jose prepared a tasting for local producers to try their coffee alongside coffee from Brazil, roasted by Ally customers in the U.S. All producers expressed that moment of pride of being able to point to a cup and say, “I made that,” or, “My neighbors made that.” Describing that full-circle moment when producers taste their own roasted coffee may sound sentimental, but it will always be a powerful experience to connect a global supply network in a single room.

For Celso and Valdeci, the trip was their first travel outside of Brazil. Today, it is more likely that a barista has been to a coffee farm than that a producer from one country has been to a coffee farm in another. The inaugural producer-to-producer exchange trip demonstrated that the lateral exchange of knowledge is compelling and absolutely crucial, not just to developing the next chart-topping coffee profiles, but to strengthening production systems in response to a changing climate and changing economies. 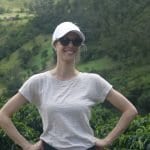 ABOUT THE AUTHOR
Rachel Northrop writes about the nuances of coffee’s global supply chain and works as a green coffee sales rep for AllyCoffee’s specialty division, where she connects roasters with meaningful information about agriculture and community at coffee origins.
About baristamagazine 1803 Articles
Barista Magazine is the leading trade magazine in the world for the professional coffee community.
Website