Adam JacksonBey is a leader in the Washington, D.C., coffee community and a voice for minorities in coffee. In this interview, we talk about his work with the Barista Guild of America Executive Council, USCC competitions, and how he sees the specialty-coffee industry developing.

Valorie Clark: What are your earliest coffee memories? Did you grow up with coffee in your life?
Adam JacksonBey: My first coffee memories are red Folgers cans at my grandmother’s house. My grandparents drank Folgers, and my grandfather drank his with a lot of milk and a lot of sugar. I would taste it and not be super into it, but I remember the exact shade of light brown of his coffee.

VC: What was your first job in coffee?
AJB: At Marvelous Market on 13th and K in Washington, D.C., in 2008 and 2009. We sold Mayorga, which is local here. It was just for commuters, second-wave-ish. It was fine. And then I moved to a gelato shop, which was fortuitous for me. We switched to Counter Culture Coffee soon after I joined, and I got the opportunity to take CCC classes and fell in love with specialty coffee from there. The Brewing Science course was my favorite because I liked the process and the straightforward science of it. I like the fact that you can take anyone off the street, get them a scale, a grinder, teach them to taste under-extracted versus over-extracted, and they’ll be able to make good coffee. I like that that accessibility is out there for anybody.

VC: Where do you see your career going?
AJB: Opening my shop, tell. For the past five years I’ve had an idea for a shop that I’d like to see through. But equally important to me is contributing to the coffee community through the BGA Executive Council and DMV Coffee. I think both paths can help people enjoy and better their coffee careers, and I think on both paths I will have opportunities to touch as many lives as possible.

VC: Can you tell me a little about the work you’re doing now on the BGA Exec Council?
AJB: I’m the vice-chair of the Outreach Committee. This year we’ve gotten as many regional groups as we can from around the country—California, Texas, Minnesota, Utah, Pennsylvania, etc.—and we work hard to find ways to help each other out. I believe local coffee communities can do a lot and be more flexible than bigger national groups. An organization is only as strong as its members, and while SCA can do great national and international things like Expo with its members, regional groups are generally more passionate within their own communities.

Through Outreach, we can use regional groups to do smaller, more passionate projects like we have been doing with DMV Coffee in D.C. for 10 years. Liz Dean and I think the regional focus allows us to support those communities better by focusing on their specific needs and developing their local leaders.

VC: You’ve competed in USCC Barista Competitions in the past—what is something you like about competing?
AJB: Literally everything. I think every barista should compete on some level in some way at some point in their career. Preparing, for me, was easy—I like process, so developing a signature beverage and putting together a routine was fun and easy for me. But actually competing was different: I consider myself introverted and shy, so getting on stage challenges me to come out of my shell.

It’s really, really hard for me, but it’s something I love to do because I love to share a message, I like structure, and I like rules. Competitions have a very specific structure and have to be done in a very specific way, and figuring out how to be creative within that structure is super cool to me.

VC: You’ve spoken in the past that you think competition needs to be more accessible. Can you talk about why you think that is, and how we can change?
AJB: Access to competition is a money issue. I was lucky my first year that the shop I was working for was able to pay for the coffee and housing to compete, but not every barista has that opportunity. Most baristas are still hourly employees who depend on tips, so it’s hard for them to justify taking a weekend off to travel somewhere and compete.

And that’s just the competition itself; it doesn’t include the wares we have to buy, coffee, travel to and from the airport, rags, milk, your tamper, signature beverage ingredients, a personal distribution tool, something to store and play competition music with, an apron, access to the right equipment to practice on. … My first year competing, I paid around $4,000 out of pocket (and again, my shop paid for coffee and housing). On top of all that financial cost, there’s the opportunity cost of taking the time to practice. What do you sacrifice? Spending time with friends? Seeing your family? A second job? You have to make those choices, and it’s not easy for everyone to make that choice.

This year, there’s the Revelator sponsorships and groups like Glitter Cat Barista Bootcamp, and so more people are able to get scholarships to meet those costs and compete. Specialty coffee is lucky because it’s a young community. We don’t have a lot of history that we’re steeped in (pun intended), so we’re able to pivot quickly and change things. It’s like being behind bar and realizing your grind is off and having to fix it—we are able to fix it right now.  There is a moment in every industry and movement’s history when the course can be set, where it goes next can be purposefully decided on by its members, and I think that moment is right now. We don’t have to say, “This is how its always going to be.” We can make competition more accessible.

VC: What is something you’d like to see change about the specialty-coffee industry?
AJB: I would like a bigger table. I think that some information isn’t spread as widely as it could be. For instance, I didn’t know you could join BGA until I stumbled upon that information on Facebook. I joined the Coffee in Good Spirits (CIGS) Working Group because I was on the BGA’s twitter and happened to see the application, so I filled it out, and now I’m able to help reform competitions from the ground floor. That’s part of why I wanted to join Outreach. That information is out there, but we’re trying to figure out how to more easily get it into people’s hands.

If we have more people talking about ways to get involved in your community—locally, nationally, globally—then we have a better chance of getting a more diverse group of people than you would otherwise. Diversity in all ways (race, gender identity, sexuality AND positions in the industry like farmer, trainer, barista, importer) solves everything because all those people have different goals, and sometimes those things are all aligned but often they’re not, and so if we have all those voices at the table we can make sure we as an industry are moving in ways that support everyone’s goals and needs.

VC: What have you learned most from coffee?
AJB: I believe in the overall goodness of people. I didn’t believe in it before, for various reasons, but I think that working in coffee and getting to meet a lot of different people from a lot of different backgrounds from a lot of different parts of the country, I do think that there are a lot of good people out there trying to do a lot of good. And they’re trying to do good for the right reasons. Before coffee, I was way more cynical than I am now, and I think I have a lot more hope in people. That may be a controversial statement to say, considering where we’re at right now in the USA, but I think I’d be a lot more distraught if I didn’t work in coffee and if I didn’t know that there are a lot of genuinely good people out there. 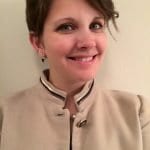 ABOUT THE AUTHOR
Valorie Clark (@TheValorieClark) is a freelance writer with a background in specialty coffee. She is based in Los Angeles.

About baristamagazine 1791 Articles
Barista Magazine is the leading trade magazine in the world for the professional coffee community.
Website