For the second year in a row, Hugh Kelly wins the Australian Barista Championship.

From March 30 through April 1, the Australian Barista Championship was held in conjunction with the Melbourne International Coffee Expo (MICE). For the second year running, Hugh Kelly of Ona Coffee in Canberra won top honors, followed by Matthew Lewin of Melbourne’s Axil in second place, and Jade Jennings of Veneziano, also in Melbourne, in third.

Hugh Kelly’s coach and boss is none other than 2015 World Barista Champion Sasa Sestic, who looked on nervously as Hugh graced his way through a flawless routine. Hugh’s performance centered around the importance of engaging the customer: Throughout his 15 minutes on stage, he kept his customers—i.e., judges—engaged in the process, involving them in demonstrations, and using language that they could understand and relate to, in his effort to change customer perceptions of what coffee can taste like.

For his espresso course, Hugh used a washed Geisha sourced from Morgan Estate in Panama, a farm noted for its biodynamic farming practices. His espressos were executed using a low dose of 17g. Hugh explained that this results in a clean profile, with flavor notes of mandarin, nectarine, and jasmine florals. He served the espressos in wide cups with angled lips, which he said enhanced the silky mouthfeel of the coffee and its long, elegant finish.

For his milk course, Hugh used a natural-processed Ethiopian. His flavor notes were blackcurrant jam, caramel, and wild, concentrated fruits for a creamy mouthfeel. The fruit intensity of this coffee was enhanced by applying a slower roast profile, Hugh explained.

Hugh’s signature drink appeared to be particularly mouth-watering. He extracted white peach juice and added it to espresso that had been infused with jasmine vapor. The combination of peach and espresso gave way to flavors more similar to apricot than peach. This juicy concoction was carbonated using a Soda Stream. Tangerine sugar was then added to a bright pink candy floss machine. The tangerine sugar had been created by infusing tangerine peel with organic cane sugar for a month so that the oils would be absorbed. This was dissolved into the coffee and served to the judges. Hugh’s notes were citrus and florals on the nose, and orange, apricot, and jasmine on the palate, with a silky mouthfeel and long finish.

I had the opportunity to taste his coffee both as an espresso and as a flat white, and it did not disappoint. It was a juicy fruit explosion and an absolute delight.

Competitor Angus Mackie, a barista and trainer also with Ona Coffee, brought the focus back to basics at a barista level with what he called “The Barista Journey.” His focus and experimentation revolved around the degassing of coffee. He discussed what he calls “The Degassing Curve,” having discovered that coffees not just roasted differently but also processed with different methods have different rates of degassing. He measured levels of oxygen and carbon dioxide in the bags, and how they affected the flavor profile. He observed that when the levels of carbon dioxide in the bag reached 75 percent, his coffee was at its peak, which was 16 days after roasting for his competition coffee and almost 23 days after roasting for many natural-processed coffees.

In his performance, Matthew Lewin of Axil Coffee explored the challenges of replicating his cupping notes in his espresso extractions. This effort led him to focus on variables involved when experimenting with extraction: water, roasting, brewing, drink temperature, and drinking vessel. One roadblock he came across with his brewing was extracting sweetness and body from his coffee. When he initiated long, quick extractions, he explained, he attained sweetness in the cup, but lacked body and texture. To overcome this, Matthew discovered that when he froze his beans using liquid nitrogen prior to grinding, therefore increasing bean density, the outcome was greater body in the cup and harmonious flavors of yellow peach, apricot, smooth texture, and a long Earl Grey finish. He also created a roast profile that led to a vibrant and very soluble coffee to complement the fast extraction. His espressos were served in cups with a wide base and an open shape, and at a low drinking temperature of 60 degrees Celsius to heighten those flavors.

Another notable routine was that of Jade Jennings, who has been competing for many years and is Australia’s current Southern Regional Barista Champion. She shared the story of her first origin trip to Rwanda, where she sourced her coffee for the competition. When she first entered the washing station, she came upon workers stomping on the coffee to activate the fermentation. They were singing to keep spirits high. Jade captured this on video and played it for the judges. The sound was recorded and incorporated into the soundtrack for her routine. The result was incredible. She didn’t just describe her experience, she evoked the emotion of the experience as well. There was the sound of chanting, the beautiful call and response of the strong voices, and the complicated rhythm of clapping of hands. Everything came together so perfectly, one felt as though they were right there with her at that washing station.

It’s not often that producers are in the audience, especially at the Australian national competition level. However, at the final round on April 1, Luiz Saldanha Rodrigues of Fazenda California in Brazil was present to watch Tilly Sproule from Tim Adams Specialty Coffee present his coffee to Australia. When he embraced Tilly after her routine, the joy that radiated from them was amazing. Luiz was so proud. It was a wonderful reminder of why we have these competitions in the first place. 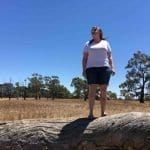 About baristamagazine 1794 Articles
Barista Magazine is the leading trade magazine in the world for the professional coffee community.
Website