The folks behind Slayer have released a new model of their machine the Slayer Steam, which will be touring the U.S. to showcase its new features.

A few months back, Slayer Espresso announced their newest machine—the Slayer Steam—with a bold claim: Its proprietary vaporizer—which dwells between the steam boiler and the steamwand and can be set between 300 degrees Fahrenheit and 475 degrees Fahrenheit—can make milk taste and feel significantly better.

Until recently, if you lived in the United States, you did not have much of a chance to experience this or test it out for yourself. All that changed this last weekend at Everybody’s Coffee in Uptown Chicago, where on February 2 Slayer kicked off a series of stateside events demoing, showcasing, and teaching techs how to wrench on the Slayer Steam.

The festivities started on Thursday afternoon with a comparative tasting between milk steamed using traditional steaming technology—which maxes out just slightly above boiling point—and milk steamed using the vaporizer on several of its higher temperature settings.

I have to say, I was skeptical. The tasting I attended was conducted entirely by Slayer representative Nelson Icenhower. Obviously, he has a vested interest in making the new machine look good. When high-quality milk was used, there was little difference between the Steam and the traditional system. The milk from the Steam was creamier, but only slightly so. However, when a lower-grade milk was used, the difference was more significant, with the Steam producing a much silkier texture and more perceived sweetness. Most significantly, when a quality almond milk was used, the flavor difference was staggering. The higher temperature of the Steam entirely took away the sour-ish, overly nutty high notes that can sometimes clash with espresso. I’m not sure I would believe it if I hadn’t experienced it for myself.

Being that all this was taking place on a Thursday, it was only natural that a latte art throwdown would occur after the demos. So after filling up on hotdogs and french fries at the complementary food truck, eating one too many “brownies on a stick” from another food vendor, and enjoying a cup of nitro cold brew from Metric Coffee, 32 baristas bravely entered into head-to-head competition on a machine almost none of them had even seen before.

Mercifully, Nelson and his co-worker Kelly Traw decided to allow competitors to practice steaming a pitcher of milk before they had to actually pour milk into espresso. With Marcus Boni entertaining the crowd as emcee, and an illustrious panel of judges like Tim Taylor of Ipsento, Allison Raber of Urnex, and Scott Lucey of Kickapoo assessing some truly incredible pours, it was a throwdown to be remembered—especially for RW (Will) Eder, who walked away with $1,300 cash and a Baratza Sette.

The next morning came quickly but brought a great opportunity for coffee technicians: a six-hour hands-on class exploring the design and maintenance of the Slayer Steam and the Slayer Single Group. The class was well attended and drew folks from as far away as True Stone Coffee in St. Paul, Minn., and as near as Chicago’s own SteamVolt Labs.

Over the course of the day, Nelson led us through the differences and details of all the Slayer models, with special attention given to the Steam. He revealed that the vaporizer itself is a miniaturized version of a superheater often used for industrial applications. He also went over the water and electrical system, which the machine designers have intentionally separated from each other as much as possible.

Several of the attendees took special interest in the Steam grouphead itself—a departure from Slayer’s iconic needle valve flavor profiling design, which can still be found on their commercial Espresso models. That original design was inspired by the variable flow rate changes that occur in lever-style machines and allowed the barista to manipulate the flow throughout the entire shot. On this new machine, the design team decided to simplify things in order to make the Steam more efficient in fast-paced environments.

Nelson says, “The Espresso line is more for the shop or barista that has the desire and time to geek out on every variable and play with different options. It works especially well at roasteries and quality control labs. The Steam is for the busy cafe that needs to kick out a bunch of really quality drinks all day.”

The Steam design utilizes magnets and electromagnets in the group assembly itself to open and close several valves, allowing for two easily programmable volumetric settings: around 40mL per 30s for pre-brewing/puck saturation and 118mL per 10s for full brewing/extraction. They also have added a feature to the Steam model that helps with pressure consistency by preventing the steam boiler from refilling while brewing.

The steaming process itself feels relatively straightforward, as it simply utilizes a lever to engage the steamwand. Anyone who has worked on a Nuova Simonelli or La Marzocco Strada will pick it up very quickly. For repeatability across different drinks and milk types, Slayer has added a customizable middle stopping point in the lever’s movement which—between the two wands—gives the barista a total of four presets to work with. As Sarah Dooley, Slayer’s Marketing Manager, explains, “The Slayer Steam actuators offer variable steam flow control tunable from 0-100 percent flow rate. This is useful both for minimizing waste and for maintaining quality. You can make a macchiato at 85 percent flow and then switch down one gear to 100 percent flow rate to make a 12-ounce latte.”

Ultimately, time will tell how well the Slayer Steam does in cafe environments, but if opportunity allows, I would definitely suggest you attend a demo event to experience it for yourself and ask whatever lingering questions you might have. Keep your eyes on www.slayerespresso.com/blog/ to stay in the loop for future events. 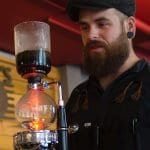 ABOUT THE AUTHOR
Joshua Dusk-Peebles works for Counter Coffee Culture in Chicago. He loves learning about coffee and sharing what he has discovered with others. He can be reached at dusk.peebles@yahoo.com or found online at duskcoffee.com.

About baristamagazine 1739 Articles
Barista Magazine is the leading trade magazine in the world for the professional coffee community.
Website