The top six competitors at last month’s United States Barista Championship crafted some diverse—and tasty—signature drinks. We talked to the competitors, who shared the inspiration behind their drinks and how to make them at home.

Each of the top six competitors at last month’s United States Barista Championship had to craft a signature drink for the judges. The signature drink is meant to be an expression of the barista’s skill, understanding of their coffee, and their creativity. Below, we talk to the top three finishers about how they came up with their drinks and the recipes they used so you can recreate these top-finishing drinks. You can read about the fourth- through sixth-place finishers here. 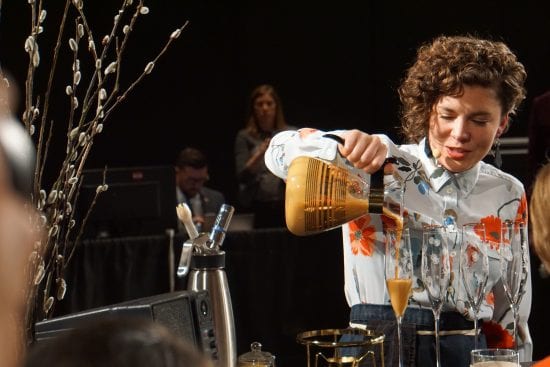 For a good portion of competition prep, we really wanted for the signature beverage to feel like champagne, as we were calling the Finca Sophia Gesha the champagne of coffees. Luxurious was to be the theme throughout—as this coffee was like expensive comfort.

Tell us about your coffee and why it works with your signature drink.
This coffee [Finca Sophia] tasted like red fruit, the tartness of a cranberry, but the sweetness of a cherry.
This coffee has the florality of a white peony tea.
This coffee tastes like a fruit-forward single-origin dark chocolate.
We wanted to make sure that all of these attributes shined in the signature beverage, but we also wanted to achieve something bigger.  We took beautiful ingredients and turned them into an ethereal, celestial, fluffy, engaging, and enveloping drink.
How did you come up with your signature drink?
We had developed a similar drink at the qualifiers using the two texturing ingredients, and found it to be the very best signature drink that we had ever tasted.
The two main ingredients were fate. As Gesha is known to be a very floral coffee, we absolutely wanted to mimic that florality. Our first hope was that the Gesha trees would be in bloom when I went to Panama, and then I would be able to smuggle back some flowers to play with. I only found three blooms on the entire farm, so we were quite discouraged in that endeavor. Then, Marcus [Young] from Boot Coffee, who was very supportive and around at a lot of my tastings and practices, suggested that he might have some dried Gesha flowers hanging around at Boot Coffee. We tried his suggestion, and it was magical. It was the spot-on floral flavor note that we were looking for. Then, we were playing with honey, but couldn’t find the right honey. The sweetness was mostly too intense, and killed any florality that we were seeking. It just so happened that Willem Boot was in Panama as we were having this discussion and was willing to bring home some honey from Kelly Hartmann’s (Finca Sophia’s farm manager) family farm. Dude, this was a coffee blossom honey that was so beautiful in its delicateness and florality! When we finally put all of these ingredients together, Devorah [Freudiger, one of my coaches] shed a tear. It was beautiful, ethereal, like nothing we could describe or have ever tasted before. 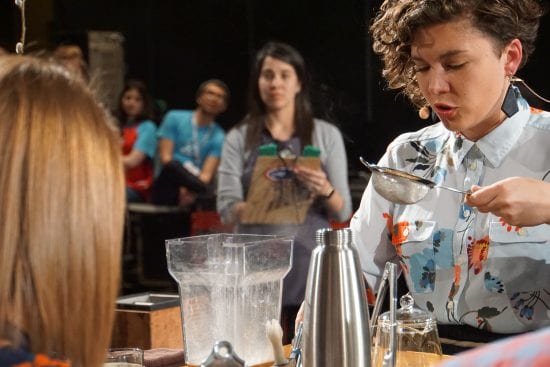 Having two texturing ingredients and three coffee-related ingredients (dried Gesha flower tea, coffee blossom honey, Finca Sophia espresso) gave us a great advantage in the “why this coffee belongs with this drink” category. Synergy, as pointed out in my qualifying routine and my U.S. routine, is actually the definition of any recipe ever. I placed an emphasis on it, to show that it was true no matter what the drink.
What did you want the judges to get from your drink?
I started with this beverage because I wanted to put something sweet on the judges’ tongue in order to hopefully have residual sugars when the espresso course came up. I knew the drink was so memorable that it wouldn’t hurt me to have it previous to the espresso. Once they tasted the espresso, they would have enough sense memory to say that the signature beverage was fitting. It required me calling out the flavor notes more, which will always be helpful to the sensory judges. It also helped me remember everything. When practicing a routine, you always say the first lines more than the last lines. Having the complicated information first made everything a lot easier to tie into the end.

– Rim flute with lemon to create a stickiness

– Adhere a 50/50 blend of dehydrated strawberry/raspberry finely ground to the sticky part of the flute (to mimic the red fruit note, give a kiss of sparkling acidity, and create an appealing presentation and engaging aromatics) 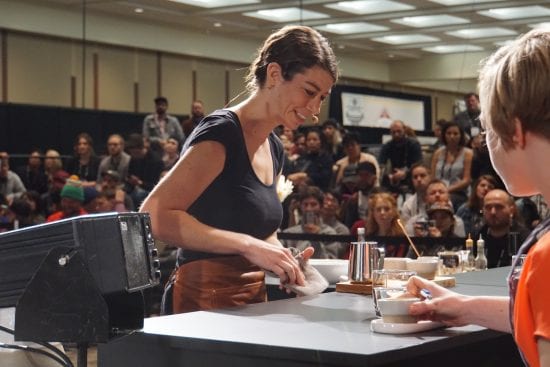 I’m always inspired by complexity and simplicity. My coffee underwent a lactic acid process, and I wanted to play with lactic acidity in another ingredient to put with my coffee. I also love a play on milk and espresso. I clarified milk, which is essentially putting citric acid (lime juice) with milk, which separates the solids and the clear liquid of the milk. The clear liquid ends up tasting like creamy limeade. This process was so simple to do, composed of simple ingredients, and easy to understand (plus yummy!).

What coffee did you use and why did you choose it?

I used a lactic washed green tip Gesha from my friends Felipe Sardi and Elisa Madrinan from their beautiful farm La Palma y El Tucan in Colombia. I chose this coffee because it cupped the best of any coffee I tasted in preparation for competition. I got the chance to go to Colombia last fall and taste tons of coffee with the hopes of finding one to use in competition. It is one of the best coffees I’ve ever tasted. I like to compete with coffees from producers I have relationships with—the entire chain of coffee hinges on relationships.

What did you hope to accomplish with your signature drink?

I wanted to serve something that was delicious, simple, had depth of complexity, and showcased my coffee well. Competition signature drinks are so tricky because they have to be extremely espresso-forward. I’ve personally had many renditions of sig drinks that “met the criteria” but did not taste good. I wanted to make sure that my judges had a pleasant, fun experience with my drink. I also wanted aroma to play a huge role in the drink. Smell has such strong connection with memory. I wanted to offer my judges more than just a taste experience. I used rose water to wash the judges’ hands as a symbol of the humble service that I’ve experienced from producers and which I believe that leaders in the coffee industry should be passing forward to our staff and peers and on to our customers. I wanted my signature drink to embody all of those things: service, aroma, beautiful coffee, complexity, simplicity. 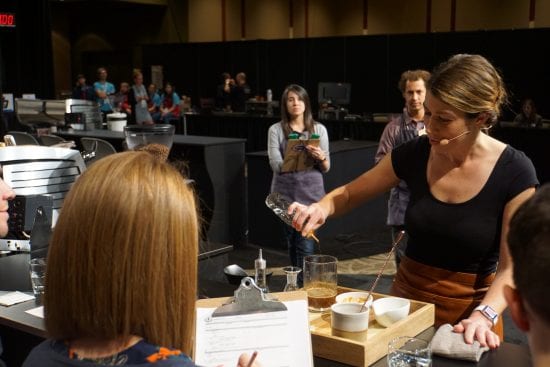 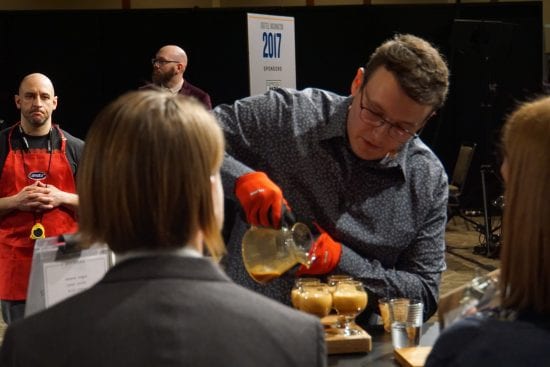 I named my drink “From Durham with Love,” and it was inspired by the coffee’s Ethiopia-like flavors—floral and bitter like hops, sweet like honey. I wanted to change the acidity around a little, so I added tartaric acid, which transformed the flavors quite a bit.

What coffee did you use and why did you choose it?

I used Finca Nuguo honey and natural process Gesha from western Panama.  It is truly one of the most stunning coffees I have ever tasted. I also have a personal connection with [Nuguo manager] Jose [Gallardo] and Lem Butler (my coach and 2017 U.S. Barista Champion).

What did you hope to accomplish with your signature drink?

I wanted to express the coffee’s amazing flavors but transform them into something else at the same time. Technology and process. 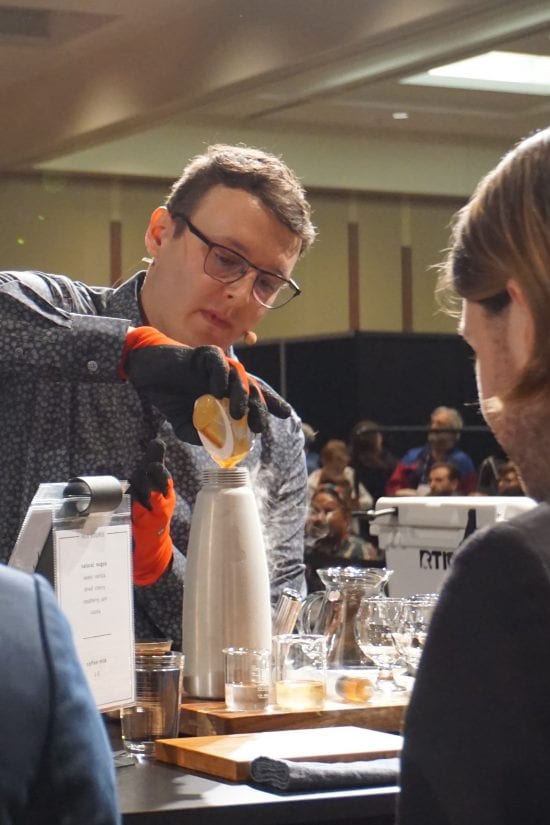 Charged in a frozen whipped cream charger with nitrous.