Despite the best intentions, specialty-coffee shops often act as early harbingers of gentrification; in the specialty-coffee industry, this fact is occasionally acknowledged and sometimes lamented, but how many coffee shops actually take steps to reverse that harm and add value back into their communities? The people behind San Diego’s Cafe Virtuoso are making moves to attempt just that.

The café, located in Barrio Logan—an area with a rich cultural history, a large homeless population, and a gentrification problem—recently finished construction on a nonprofit coffee training lab called San Diego Coffee Training Institute (SDCTI). Cafe Virtuoso is looking forward to putting the lab to a use that serves the community’s vulnerable and displaced populations: free Specialty Coffee Association barista and roaster certification courses for underserved populations in San Diego, including youth aging out of foster care, local homeless folks, and people recently released from incarceration. SDCTI will be the first-ever SCA-certified campus that is also a nonprofit focused on offering these skills to marginalized populations.

The idea for the lab itself has been in the works for some time; the initial concept was a space where owner Laurie Britton and director of quality control Savannah Phillips (who now also runs SDCTI) could teach classes to wholesale clients on coffee prep. It was Savannah who came up with the idea for the nonprofit side of the lab, which was inspired by a desire to work directly with those in the surrounding community most impacted by gentrification and long-term regional poverty. “We’ve always talked about having a training lab for Cafe Virtuoso clients, so why not also also use this lab to benefit the community?” asked Savannah.

Barrio Logan has long been a cultural center in San Diego, but due to a demographic makeup that is largely Latinx (specifically Mexican) and includes a high proportion of non-naturalized citizens, the neighborhood has been politically disenfranchised over time. More recently, the area has become a target for gentrification, further compounding the challenges for local marginalized populations.

For Savannah, an SCA-certified Level 2 barista and SCA instructor, there was a perfect symmetry to the idea of using paid classes in an SCA-certified campus to provide the same valuable education free of charge to local marginalized populations and allow them to develop stable, potentially lucrative careers in coffee. Savannah hopes SDCTI will not only help individuals hit by both long-term and recent conditions in Barrio Logan to gain stronger careers, but also enhance the coffee community by introducing more skilled coffee workers who truly understand the value of a great cup of coffee and how to make it happen. “We in the coffee industry know that coffee is not just a beverage that gets you through the day; it’s a major source of income for millions of people around the world who depend on it for their daily survival,” Savannah said. “Being able to teach others and make them excited about understanding the immense complexities in processing, roasting, and brewing coffee elevates the perception of value that these coffee communities bring to the world.”

Cafe Virtuoso was founded on Laurie Britton’s passion for sustainable practices in 2008; it’s currently the only 100 percent certified-organic specialty-coffee roaster in San Diego. But it’s crucial to acknowledge that sustainability isn’t just a practice that exists in producing countries—it also means that specialty coffee needs to remain in balance at a local level rather than helping to displace local populations. Circulating wealth and jobs back into the neighborhood in which a café operates is an important investment in stateside sustainability, an aspect that is all too often ignored by coffee companies. The creation of a coffee training lab that provides professional growth opportunities to people who haven’t traditionally been able to access them could represent a meaningful move toward correcting the harm—albeit unintended—that specialty coffee has brought to certain communities. To learn more, donate, or enroll, you can visit sdcti.org. 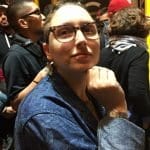