The New York Coffee Festival, now in its fourth year, takes the city by storm with competitions, giveaways, and fantastic coffees!

The New York Coffee Festival was held at the Metropolitan Pavilion in New York’s Chelsea neighborhood on October 13-14, with an industry day on October 12.

The event brought together numerous coffee professionals and enthusiasts to sample coffee, nondairy milks, and food, learn about brewing methods, and check out the latest advancements in the coffee industry. All profits from the event went toward Project Waterfall, which brings clean drinking water, sanitation, and education to coffee-growing communities.

Roasters and companies from around New York City and the world came together, sharing with attendees latest advancements in the industry, as well as some unreleased products, such as Silk’s Barista Collection milk alternatives. Booths on the floor ranged from simple ones with samples and products to purchase, to elaborate ones in the theme of a carnival, to one that featured people dressed as dancing bottles of cold brew. In addition to the samples, attendees were able to enjoy coffee-infused cocktails while listening to live music, attend talks given by industry professionals, and watch latte art demos.

The centerpiece of the festival was the Coffee Masters competition, which brought together 16 competitors from across the globe to battle it out for a $5,000 cash prize, as well as prizes from sponsors, which included Slayer Espresso, Hario, Silk, Mahlkönig, and Battenkill Valley Creamery, with water provided by Waterwise.

In the end, the competition came down to a battle between Reef Bessette of The Coffee Movement in San Francisco and Remy Molina of Café Barakah in Costa Rica, with Remy taking the top prize. (Read our interview with him here.)

Reef, who had competed in Coffee Masters before but had never made it to the finals, talked to us about his performance after the finals; he mentioned he finished several of the rounds with plenty of time left on the clock, which he credited to his bar flow in the competition space, as well as his experience at The Coffee Movement. “I’ll often be steaming at one time while turning off the shot at the same time, and I’ll empty the portafilter while shutting off the steam,” Reef said. “Honestly, the adrenaline gives you that extra boost. I feel like I’m on super speed when I’m up there.”

Reef’s signature drink was Manhattan in Fog, which he said was “meant to transport the drinker to autumn in Central Park.” As part of his presentation of the signature drink, he activated dry ice to create a fog effect and used fake foliage to decorate a box for serving the drink, which had very earthy notes.

Jeffrey Young, founder of the rotating Coffee Festivals, is launching an inaugural one in Los Angeles from November 9-11. The coffee festivals are also held in London, Amsterdam, and Cape Town 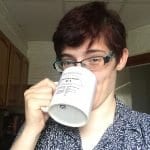 ABOUT THE AUTHOR
Monica Reida is a writer currently based in Milwaukee. Her writing has appeared in OnMilwaukee, Milwaukee Record, NewCity, Iowa Theatre, and Gapers Block, where she served as the politics editor from 2013-15. She is the creator of California Flags, a Twitter bot dedicated to municipal and county symbols of California. When she is not writing, she can be found reading with her cat, tweeting too much, or taking photographs of architecture and public infrastructure, most of which can be found on her Instagram.