Fair Fellow Coffee Roasters brings equality and domestic violence to the forefront in a throwdown for women, gender queer, and gender non-conforming baristas.

“No (CIS) Boys Allowed!” the posters around downtown Tulsa, Okla., read. While latte art throwdowns are fairly common in Tulsa’s established coffee scene, this one created a buzz from the moment word got out. It was different. It had a deeper message that needed to be spread.

The rules: No (CIS) Boys Allowed, although they could attend and support. $5 entry fee, with all proceeds going to Tulsa’s Domestic Violence Intervention Services (DVIS). Any woman, gender non-conforming, gender queer, identified female, and transgender barista was welcome to test their art skills. Their tools? Steady hands, steamed milk, and a canvas of espresso. Once signup was complete, 15 baristas from all over the state were slated to compete in a bracket-style format, their art to be judged by a third-party crew of judges.

The venue: Fair Fellow Coffee Roasters. This ex-adult bookstore (dating back to 1931) was resurrected from its unholy past and born again in the light of its floor-to-ceiling windows, Edison bulbs, and coffee siphon. Seating options include small and intimate tables, bar stools, and community tables. If “vintage living room” is more your cup of coffee, grab a seat on the brightly colored armchairs or plop down on the blue velvet, ’80s-style couch right next to Elsie, the air roaster.

Fair Fellow manager, Jourdan Thorne, and co-owner, Danielle Unruh, were the masterminds behind the event. With the latte art throwdown and coffee shop scene tending to be male-dominated and filled with a fair amount of machismo, they say, women often find themselves shying away from events like this. Jourdan and Danielle wanted to create an event that was more inviting for everyone. “When it comes to queer, lesbian, trans, or non-binary individuals, there’s not really room for that to be discussed,” says Danielle. “What we did with this event was create a discussion for future events like this and help establish an area and a space for everyone to feel comfortable enough to compete.”

Danielle goes on to explain that with the heavy sense of masculinity surrounding the coffee industry and these type of events, it’s often hard for women and people of the LBGTQ community to feel comfortable working in the industry and entering and competing in these types of events. “There are still shops that are firing or demoting employees because they’re pregnant­–and that’s happening on a local level,” she says. “It’s starting to get better  … but there is still more that can be done,” says Danielle.

While some coffee shops and businesses are trying to play catch-up and whole-heartedly jump on board with the concept of equality in the workplace, other shops seem to have it figured out already. “There’s a coffee shop in Oklahoma City, Cuppies and Joe, whose two male employees took all shifts on the day of the throwdown so the females could come compete,” says Jourdan. Equality in the coffee industry and equality in general was one of the main topics this event was meant to fire up discussions about.

Bringing awareness to domestic violence and helping to raise money for DVIS was the other. Jourdan, who spearheaded the event in collaboration with Green Country Throwdowns, decided she wanted it to be a benefit for domestic violence, a topic that hits close to home. “My mom’s friend passed away from domestic abuse,” says Jourdan. “I know too many other people who have experience with domestic abuse. It’s something near and dear to both Danielle and myself, so we decided to have this event benefit DVIS.” Not only did all proceeds from the $5 buy-ins go directly to DVIS, but donations were collected at the door for items such as clothes, feminine products, and hygiene care.

By the time the winner had been crowned and the last few caffeinated observers filed out, the event had raised $1,000 for DVIS, thanks to a generous match from the worldwide Swedish-based company Oatly. Many other supporters, both local and industry-based, pitched in to help out with the throwdown, from Tulsa’s own Heirloom Rustic Ales donating craft beer and Blue Smoke BBQ donating all tips and 15 percent of their profits to DVIS, to industry staples like Slow Pour Supply donating equipment and a grand prize sponsorship package. In all, over 15 local and industry sponsors contributed through donations, financially or with prizes.

In the end, the Fair Fellow latte art throwdown did its job. It sparked local discussion about equality, from the moment the promotional posters were put up around the city and on social media, to the weeks after it was over. Since the throwdown, similar events have been put into motion, including two in Texas put on by Slow Pour Supply, that aim to keep the discussion going. 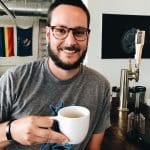 ABOUT THE AUTHOR
Jonathan Trout is a freelance writer and content manager based in Tulsa, Okla. He loves spending time with his wife and dog, traveling, being outdoors, and enjoying a good cup of coffee.