One writer’s journey to learn about the needs of farmers in Chiapas, Mexico, turns into a lesson on the importance of remembering the history of a region in this two-part story.

A few months ago, Elizabeth went to Mexico to learn about agricultural information systems, and in turn learned about the troubled and immense history of growing coffee in the Chiapas region. In this two-part story, she shares thoughts from conversations with farmers and pushes for a deeper understanding of the region’s past to help inform and shape its future.

I interviewed José Aquinos, the manager of the Bats’il Maya coffee cooperative, in Chiapas, Mexico, where we sat outside amid spectacular mountains and soft reggaeton music that drifted in from nearby. He was traveling to Colombia the next day, so it was my last chance. Another worker at the co-op who spoke English, Miguel, translated for us.

I asked José what he considers the greatest challenge to growing quality coffee. He responded, “La historia,” an answer so unexpected I was sure it could not mean what I thought it meant. But moments later Miguel confirmed what I had heard. I had expected an answer that seemed more directly related to coffee growing, like coffee leaf rust or unexpected rain patterns. But José elaborated: “Things like rust leaf can be fixed over time, but the history will never go away.”

My goals in visiting the coffee co-op were modest. As an Information Systems grad student, I was there researching how indigenous coffee farmers access agricultural information, and whether there are critical gaps they need to fill to improve their crops. To learn that my concerns ranked far below their concerns was a surprise and a shock. After learning more, my understanding of coffee farmers and their needs for mental and spiritual quality of life has changed dramatically. To do the labor and solve technical problems is one sort of challenge; a far greater challenge is finding dignity and satisfaction within a way of life that has been fraught with peril and suffering for hundreds of years.

Before I launch into the history of coffee in the Chiapas region, I feel it is necessary to tell you my personal history with coffee, which began in middle school for me. In Fuquay-Varina, N.C., I would go to the Hyphen, a local coffee shop and roastery, and drink coffee every day after school. Much to my mother’s distress, I would tell her that when I was old enough, I would work there and be a barista. I was later hired in 2005 at Murky Coffee; though my employ was short, it inspired me to stay in specialty coffee. I would go on to compete, and lose, in many competitions. I realized that while I loved being a barista, I was interested in exploring other ways of participating in the value chain.

I emailed Tim Schilling, founder and CEO of World Coffee Research, asking for advice. He suggested viticulture. Naturally, I ignored his advice and ended up in a Library and Information Science program at the University of Washington. My dream is to one day create a library for coffee where farmers, baristas, and others can do research on any aspect of the value chain. I went to my professor and was complaining about how I felt I would never find a way to reach my goal because I didn’t know enough about the processes of coffee or what people at origin need. He put me in touch with Capeltic, an organization that connects farmers with the global market. For now I’m working, hopefully, on creating a website for farmers in the Chiapas region of Mexico—which is how I came to be in Chilón, Mexico, researching the needs of coffee farmers.

The history of coffee in the Chiapas region is one of colonization and genocide. In 1883, the Mexican government officially stole the land of the indigenous peoples there and began to parcel it off to individual land owners in order to finalize the border with Guatemala. German and Italian coffee producers came to start using the land to cultivate coffee. The colonists needed laborers to complete the difficult task of growing coffee, and through strong-arm tactics and other methods, they coerced workers into signing contracts that put them in situations similar to indentured servitude.

The Bats’il Maya cooperative and Capeltic seek to bring back dignity to the indigenous community by providing training on how to grow, process, roast, and serve their coffee. The slogan of Capeltic is Nuestro Café—Our Coffee, in English. And it truly is their coffee. I didn’t understand the impact on the farmers until my first visit to one of the coffee fields. I was traveling with two documentary filmmakers and the social media liaison for Capeltic; they had invited me in the event that it could aid my research, and they kindly let me know that we would be leaving at 4:30 a.m. so that the filmmakers could catch some good shots of the sunrise on their drone.

When we arrived at the home of one of the farmers, I took my time to look at the decorations on the walls while they were filming. There was a calendar that featured Japanese landscapes (given to them, I learned, by Japanese investors), a shrine to the Holy Virgin, pictures from the farmer’s wedding, and two postcards. One postcard showed a close-up picture of a ripe coffee cherry. The other featured a coffee field and the words, “El Cafe de Capeltic es 100% organico.”

Near the photos, there was a basket of dried coffee with the cascara left on and a small bucket where they were throwing the defective beans. They would use that coffee later to make capel, a sweet coffee drink unique to the region. The farmer’s home demonstrated that he had pride in his coffee. We were there to make a video of him demonstrating a skill that he had learned: how to prepare the coffee for the growing season. We watched as he slashed weeds and growth away from the base of the coffee tree. It was hard work, but he seemed truly excited to show us his technique.

Part two of this story will be published Saturday. Although Chiapas is far from Mexico City, it’s important to stand with our friends in Mexico after the devastating earthquake that struck the city earlier this month. We encourage you to check out this list of organizations providing aid to those affected to find ways of showing support. 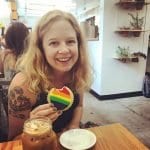 ABOUT THE AUTHOR
Elizabeth Fedden is an MLiS Candidate at the University of Washington in Seattle, where she researches ways to connect coffee people with the information that they need. One day she hopes to create a library that focuses only on coffee. Photo by Catherine Darling.
About baristamagazine 1790 Articles
Barista Magazine is the leading trade magazine in the world for the professional coffee community.
Website