Coffee Masters is one of the most exacting coffee competitions there is. We break down the notoriously rigorous tournament, held this weekend at the London Coffee Festival.

Some people love competing, experiencing the thrill of pitting their skills against someone else of similar experience and passion. Others love the simple things in life like a good cup of coffee. When these two things meet in the same person, you get an entrant to Coffee Masters, a global competition held annually at the London and New York Coffee Festivals. This weekend it was London’s turn.

Over an array of disciplines, Coffee Masters brings competitors from around the world together to battle it out over seven distinct events to see who has the strongest knowledge, most discerning taste buds, and best latte art skills. Taking place at the already popular London Coffee Festival, the draw of this competition is a main attraction for many of the festival goers. Attendees wishing for a good view arrive much earlier than the schedule would have you believe is worthwhile, each vying for a front-row seat, thereby securing the best vantage point with which to watch the trials unfold. By the time things get going, it’s standing room only.

At Coffee Masters in London, the baristas Remy Molina from Costa Rica and Edgaras Juska of England come out smiling and relaxed as their names are called. Either they are extremely good actors or the audience is more tense than the competitors. Seconds later—as a literal blind tasting opens the competition—it’s a different matter.

Six coffees are placed in front of the participants, and they are allowed two minutes to taste them. Both Remy and Edgaras look to be so deep in concentration that when a photographer snaps a picture millimeters from their faces, they show not even a flicker of acknowledgement. They’re then blindfolded, the coffees are mixed up, and both contestants have to place them back in the correct order. It’s a difficult business already, but the addition of harsh spotlights, loud music, and intimidating countdown as the allotted time draws to a close do little to calm the atmosphere.

Cheeky MCs Jordan Michelman and Gwilym Davies advise: “Even the judges didn’t come out too well when we tested them on this one.” This makes it all the more impressive when Remy Molina storms to the lead with four correct answers.

The second stage of the competition asks baristas to brew their favorite coffees. Competitors must be able to identify distinct flavors and accurately describe them to the judges, who in turn have to agree those flavors are present. Anyone that’s been to a tasting knows how subjective this can be, so it’s an unusually tricky task.

The competition heats up as the days roll by, and at the quarterfinals we see two more competitors take to the stage. Rob Clarijs of the Netherlands and James West from UK have been tasked with cupping (the practice of observing the tastes and aromas of brewed coffee). Again six different coffee cups are produced. This time, however, they are asked to correctly discern where each of the coffees were roasted and grown. It’s an unfathomably difficult challenge, and both Rob and James struggle. James eventually gets one right, but this seems to be more by luck than by skill.

Everyone is very polite and claps at the correct points, but we all know the discipline we are truly waiting for is latte art. For this test, a die with complex designs is thrown, and the competitor has to recreate the image. Gwilym advises why latte art is popular with baristas, as well as for those of us watching: “When you’re making 300 cups of coffee a day, latte art is a wonderful way of connecting with the customers and having some fun.”

But this is not just a bit of fun. If you’re pouring drinks in your cafe, latte art might be considered simple, and should the milk not flow as the barista would like, they can simply change the pattern as they desire. With a dictated image it’s all the more tricky, and while competitors have two chances to get the perfect heart or flower image, this in itself can cause issues. If the first attempt is better but sits around for a while, the silky-smooth shine will begin to fade and bubbles will appear on the surface. A big no-no in the latte art world!

It’s a tense few minutes, and both competitors show flair and precision under trying circumstances. When James comes out just ahead of Rob and is through to the next round, some in the audience audibly disagree, though most cheer in confirming the judge’s decision. Eventually, after all the rounds are complete, James Wise of Treves & Hyde comes out victorious, beating Nick Maybe of Assembly Coffee to win £5,000.

While in the throes of the competition, it’s easy to take this all a little too seriously. But no matter who the judges eventually crown king (or queen) Coffee Master, the one true winner here is coffee itself. 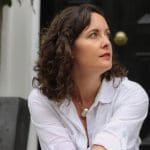 ABOUT THE AUTHOR
Alice Toby-Brant has been a blogger and freelance writer at www.themiddlesister.co.uk for seven years, writing about an array of topical subjects. She also currently curates Instagram accounts for small businesses in the gorgeous town of Cambridge (UK not US). She’s an avid photographer and enjoys populating her Instagram with images of whatever she feels is relevant—usually coffee, flowers, and food—with the odd selfie thrown in. You can find her on Twitter and Instagram under the handle @theemiddlesis.