Coffee shops are community hubs, but how do you build a community when your town doesn’t have the most vibrant coffee culture? We look to the growing coffee scene in Indianapolis to illustrate how to build a community that rallies around coffee.

Coffee is a means of community building, both internationally and locally. Those of us involved in this community know that—we could even argue that this aspect of the industry is just as indispensable to the rise of specialty coffee as new varieties and innovative washing processes are. As communities, we are part of a larger ecological system. How these fledgling communities grow, lay down roots, and fold themselves into the larger landscape of coffee is a fascinating aspect of the coffee world.

The Midwest is known for many things, but coffee hasn’t traditionally been one of them. There are many reasons for the lack of coffee prowess, but the wide open spaces and traditional home/work roles in the Midwest have created a challenging environment in which to build communities centered around the idea of a third place (neither home nor work) that provides a specialty product.

However, over the last 10 years, that perception has been changing. So how did the coffee communities forming in the Midwest in those early years challenge the old routine? They identified a need, and began to provide fuel for community gatherings where members of the community could participate in identifying shared interests and needs. Thanks to these pioneers, in recent years, the Midwest has seen a surge of budding coffee hubs. In Indianapolis, the rise of the coffee community has coincided with the rise of the city as a food-and-beverage destination over the last few years.

Hubbard and Cravens was the first shop in Indianapolis to establish a rigorous training program, along with general coffee education for new baristas. Entire generations of baristas have come through their training program, and are now able to use that education to run their own shops and programs around town. Hubbard and Cravens also chose the location of their first few shops carefully, placing them in neighborhoods that lacked a space to congregate outside of backyards and homes. The customers who frequent Hubbard and Cravens already have a neighborhood in common; once they were given a place to come together, figuring out common interests and needs became a focus of the shop. These gatherings have often been centered around music and art featuring local artists.

Bj identified the need for a more personalized, boutique coffee experience featuring third-wave techniques. Once her partner, Andy Gilman, came on board, they began to brainstorm ways to enhance the coffee community, hoping that growth in the local coffee community would positively impact the quality of the community at large. With this idea in mind, three years ago Andy established the League of Lattes, a monthly latte art competition—no buy-in, bracket-style, everybody welcome. Now in its third season, the league draws baristas and spectators from all over the state.

Both these shops laid the foundation for diversity. Because of the legwork both shops did—defining a need for a third space in communities, adjusting customer perception to the quality and accessibility of specialty coffee, and educating both baristas and consumers—the stage was set three years ago for a new species of coffee shop to come on board. The influence and diversity of these new shops are wielded in different forms, but they have become keystones of coffee in Indianapolis.

Tinker Coffee, opened in 2014, is solely a roasting operation, but they have built a loyal customer base throughout the city. Tinker has done this through relentless community involvement and public education. The cupping classes they offer every month are consistently sold out.

Owners Steve Hall and Jeff Johnson have built their business by weaving themselves into the fabric of the larger community. You can find their coffee almost everywhere in town, and they make themselves both visible and accessible, showcasing their coffee and personality at beer festivals, creative mornings talks, and other local events. Every month they feature a different local artist on the walls, and on First Fridays local music and local coffee are served hand-in-hand at their roastery. Steve, in particular, has a gift for talking coffee and making complex ideas simple.

Josie Hunckler opened Rabble Coffee in 2015 in her Woodruff Place neighborhood on the Eastside of Indianapolis. The idea of opening up a shop in an underdeveloped area with little interest in specialty coffee was daunting, but Josie has come up with many creative ways to enfold coffee within community. Over the last two years, Rabble has grown into the perfect third place for the surrounding neighborhood. There are open-mic nights, poetry workshops, and kid sing-alongs on weekends, and she recently added typewriters around the shop for patrons to record passing thoughts.

Josie has consciously created a community-centered coffee shop rather than a coffee-centered community shop, and it is easy to see the positive impact this gathering space has had on her neighborhood.

Diversity is often a measure of strength in a community, and in the last few years, Indianapolis has seen the rise of unique shops featuring different approaches to coffee. The commonality is their focus on building neighborhoods rich in art, music, and literature alongside business. With several more shops on the verge of opening, the stage is set for Indianapolis to join Nashville, Tenn., Chicago, and others as powerhouse coffee communities of the Midwest. 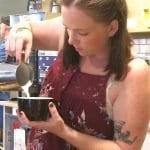 ABOUT THE AUTHOR
Joanna Greves is a roaster and barista trainer in Indianapolis. She is passionate about both coffee and her community. When not frequenting local shops, she can be found outside with a book and her dogs.