Gender, race, and queerness explored at Behind the Bar in Boston, a panel discussion meant to share stories and provide solutions to support inclusion in the coffee community.

The coffee community in Boston is changing, with new local cafes and roasters popping up and companies like Blue Bottle and Intelligentsia moving to New England. Despite this rapid development—or perhaps because of it—the community of coffee professionals in the Boston area seems at times more competitive than supportive. However, the crowd that gathered at Counter Culture Coffee’s training center in Somerville, Mass., on March 23 suggests progress, as nearly 50 individuals gathered for Behind the Bar, a panel discussion about the challenges surrounding women, queerness, and race in the workplace.

The event provided a forum for women to publicly share their experiences in coffee service with an empathetic crowd. But really, the conversation focused on solutions and what can be done as a community to ease and eliminate the challenges of otherness.

Many of the solutions discussed were steps for owners and managers to take within their companies to create safe spaces for their staffs. The panelists generally agreed that a good HR department can help to alleviate a lot of the problems faced by women in the workplace—but of course, many small specialty-coffee companies lack this resource. Liz pointed out that—even for companies that cannot afford or justify a full-time HR specialist—part-time HR services can be outsourced. At the very least, companies should establish procedures for dealing with difficult interpersonal situations. “That is the most important thing—to have guidelines,” offered Kristina.

Expanding training was another great suggestion made by the panel. Amanda suggested that each company invest in at least one person to go through conflict resolution training—and that that person then shares the skills with others in the company. She also recommended training employees on communication, just as they would be trained on recipes. “We train people how to make drinks to death,” she said. “Do we train people on conflict resolution? Do we train people on communication? Do people know how to use ‘I-statements’ so they can validate the interaction that is going on and also present their own humanity in that moment?”

Overall, the tone of the event was positive despite the heavy and difficult topics discussed. The event’s mission was to establish how we can improve our work environments and what positive steps we can take to combat the prejudices experienced. It was a huge task, and of course, there’s still more to talk about.

Surely many attendees of the event left feeling motivated to make changes in themselves, their companies, and the larger coffee community. As Liz put it, “At the end of the day, your words are meaningless if your actions don’t do anything.”

This was the first event of its kind hosted in Boston, but the organizers plan to host similar panel discussions delving deeper into specific topics, along with workshops on labor rights and a few social events. 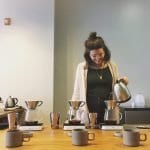 ABOUT THE AUTHOR
Becca Pollock is the director of coffee at 3 Little Figs in Somerville, Mass. She holds a BFA in Writing, Literature & Publishing from Emerson College. Mostly, she writes short stories about cats.