Barista Nation strikes New York City with panels, talks, and fun events aimed at promoting community and the exchange of ideas between baristas and coffee professionals.

On May 4, Barista Nation—a grassroots event series produced by UNIC Espresso Machines in collaboration with local roasters, baristas, and other members of the coffee community—was hosted at the bright and open Shop Studios in New York City.

Barista Nation is aimed at fostering a sense of collaboration and community, and delivering accessible knowledge, content, and professional development. The event was structured casually, with panels and lectures that started at 12 p.m. and ran through the rest of the day, giving attendees the opportunity to come and go. Throughout Barista Nation, attendees also got a chance to check out some of UNIC’s espresso machines and participate in an alternative milk latte art throwdown hosted by Pacific Foods.

The event consisted of a series of panel discussions and talks by industry leaders. One of the talks was given by Giorgio Milos of Illy Caffe, master barista & Italian Cup Champion, on the history of espresso machines and how various technological and cultural innovations over the years have shaped the way we prepare and understand espresso. The keynote address was given by Gregory Zamfotis, founder of Gregory’s Coffee. Having opened more than 20 stores, Greg shared his perspective on how to keep up with the pace of innovation of the specialty coffee industry.

One of the panels was “The ‘To’ in ‘Seed-to-Cup,” an aptly named discussion led by Teresa von Fuchs of Genuine Origin. She was accompanied by Cheryl Kingan, the green buyer for Cafe Grumpy, and Mayita Mendez of Irving Farm, who represented the perspective of the producer, as her family owns a couple of coffee farms in El Salvador. The in-depth discussion was accompanied by a slideshow of the names and faces of folks who make up the coffee supply chain, and panelists talked about the importance of building and maintaining relationships every step of the way.

There was another panel discussion called “Tales from Opposite Sides of the Clipboard,”  in which panelists included a mix of barista competitors and judges. Representing the competitor side were recent USBC champion Kyle Ramage, 2016 USBC champion Lem Butler, Brewers Cup finalist Jenna Gotthelf, and USBC finalist Sam Lewontin. On the judges side, there was Anna Gutierrez, WBC head judge Michael McCauley, and USBC head judge Brent Hall. The panelists talked about their views on the point of barista competition, the impact of various rule changes over the years, and how competitors choose their coffees.

It was especially interesting when discussion turned to the question of the accessibility of competition, and which competitors are offered the resources and support to compete—and the extent to which judges can or should be involved in mitigating or leveling an unequal playing field.

At one point, moderator Lorenzo Perkins—a USBC competitor and former BGA Chair—asked, “Why is there no female WBC champion?” This led to an excellent examination of what could be done to address implicit biases. Lem Butler also brought up the fact that there has never been any barista competitors from an African nation represented at WBC despite the fact that many African countries hold barista competitions.

Appropriately intersecting some of the issues brought up in the competitions panel was another called ‘The Future is Intersectionality,” geared at discussing tools and strategies for cultivating meaningful inclusivity and diversity within the coffee industry. Led by Sarah Allen of Barista Magazine and myself, the panelists included Scout Rose of Joe Coffee, D’Onna Stubblefield of Counter Culture, Olivia Miles of Royal Coffee NY, and Jess Hobbs of Genuine Origin.

Conversation ranged from why the topic of intersectionality (a term coined by Kimberle Crenshaw to describe how social identities interact and overlap and to explain how systemic injustice and social inequalities can occur on a multidimensional basis) is relevant to the coffee industry, and what leaders and folks in the industry could be doing to create more inclusive workplaces—including examining hiring practices and taking the time to read, self-educate, and listen to the voices of marginalized groups.

It was a great end to a day that provided a variety of thought-provoking discussions with industry leaders. Barista Nation finished off with an opportunity for folks to mingle and chat—on the roof—about the day’s discussions, and once the chairs were cleared out, there was time for some spontaneous synchronized cartwheels, too! 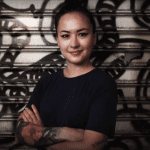 ABOUT THE AUTHOR
Liz Dean has been working in the coffee industry for six years. Her first coffee job was at a Seattle’s Best in Borders above Penn Station before becoming a barista at Irving Farm’s Gramercy location. She is now the Director of Retail, where she oversees operations and staffing for the seven cafes in Manhattan and one in the Hudson Valley. She considers supporting and advocating for her staff to be one of the most important parts of her job.

About baristamagazine 1740 Articles
Barista Magazine is the leading trade magazine in the world for the professional coffee community.
Website