1951 Coffee, in partnership with the Bay Area Coffee Community, hosted a panel discussion called “Refugees Welcome?” inviting recent barista graduates to open up about their experiences in the coffee industry.

1951 Coffee Company held an educational event in conjunction with the Bay Area Coffee Community (BACC) at their café in Berkeley, Calif., on July 24. The event “Refugees Welcome? Perspectives on Inclusion in Specialty Coffee” was a panel discussion featuring graduates of 1951’s barista training program. Food was served from Old Damascus Fare, whose owner was one of 1951’s first baristas when the nonprofit opened its cafe in 2017, and a raffle was held for attendees sponsored by Acaia, Fellow, and Baratza.

A worksheet was provided to entrants intended as a thought-provoking exercise on barriers to entry into the coffee industry. Some of the questions were: “What level of computer skills are necessary to fulfill the everyday duties of an entry level role in your company?”; “On a scale of 1-10, how much English does it take for you teach someone to make beverages on your menu?”; and, “If you are in charge of hiring, can you name any Schedule A I-9 compliance documents?”

The panel focused on attendees’ experiences with coffee. Amanuel, a program graduate and barista at Mazarine Coffee in San Francisco, shared how his early experiences with coffee in Eritrea were very communal. Coffee ceremonies were frequent and an important part of social functions. Ahmad, a graduate and barista at Blue Bottle, described how he did not drink coffee prior to immigrating to the U.S. from Syria and felt a big jolt of energy the first time he tried it. Later, Amanuel discussed how the word “barista” had a negative connotation in Eritrea possibly due to Italian colonialism. He shared that he prefers to describe his position to family and friends as a “coffee maker.”

When the panel shifted focus to some of the challenges attendees have had working in coffee, a common thread was their difficulty with American names. One graduate who preferred to remain anonymous described a situation where they had difficulty differentiating between “i” and “a.” A customer told the graduate their name was “Sid” and started laughing when they saw on the screen their name had been spelled “Sad.” To make matters worse, the graduate did not know at the time what the “sad” meant, but understood that they had made an embarrassing mistake. The graduates echoed the importance of having supportive managers and coworkers to ask if certain phrases were correct or appropriate. In a particularly heartfelt moment, the anonymous graduate spoke of how anyone can make it if they are given a chance.

The event closed with 1951 cofounder Doug Hewitt sharing his experience of taking regular lunches at a café he worked at with an Eritrean coworker and how it helped to shape his path toward working with refugees. Following, attendees were given the opportunity speak with 1951 staff and learn more about how they can get involved.

Contributions can be made to 1951 Coffee Company through their campaign on Crowdrise. 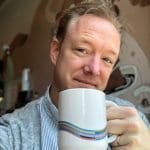 ABOUT THE AUTHOR
Tom Baker has been professionally making coffee since 2003 and lives in San Francisco. Currently he works for an industry-leading technology company, where he is a Barista Coordinator within their Real Estate and Workplace Services division.