Ariadna Chaparro is the 2018 Mexican Barista Champion! She talks to us about her start in coffee and what inspired her to take part in—and ultimately win—this year’s barista competition.

This year 50 baristas participated in the preliminary competitions all around Mexico, with 20 competitors moving on to the Mexican Barista Championship. The competition took place September 16 at the country’s biggest coffee expo in the capitol city. This year’s winner was Ariadna Chaparro, the fourth woman to be crowned Mexico’s barista champion. She will be proudly representing Mexico in Amsterdam in 2018.

Ximena Rubio: When did you start working in coffee?
Ariadna Chaparro: I started at Starbucks. I remember even back then I was really competitive. They have a title called “Coffee Master,” which is the best position a barista can have in the company, and I wanted to have that title. I had only worked eight months in the store and then jumped to a position in marketing. We used to travel a lot to different expos and social events.

XR: When did you got interested in specialty coffee? What made you leave Starbucks to have a more specialized career?
AC: In 2012, we visited an international expo in Puebla called Cumbre Latinoamericana del Café. They had different workshops and I signed myself up for a basic latte art workshop, and started to get more interested in coffee. After that I discovered a coffee shop and roastery, Rococó, near my house. I remember an amazing smell of vanilla all over the street, so I entered the shop and they were roasting coffee and I drank an amazing flat white with coffee from Veracruz. I think this is why I’m so in love with that producing region. After that I left Starbucks and looked for a job opportunity elsewhere.

XR: When did you start working at San Remo? What are your areas of focus?
AC: I was working for Avellaneda, a coffee shop in Mexico City, when I got the job offer from San Remo. In February of 2015 I started working for their new project—I was hired to plan and create a coffee shop called Centro. I wanted to create a coffee shop for everyone, a place with different coffees where there’s a little bit for everyone. Now that it’s open I work in San Remo’s Coffee Matters School. I think what I love most about it is being able to share and exchange knowledge with other coffee fanatics. Thanks to San Remo, I have had the opportunity to do all the SCAE certifications in order to be a better barista trainer.

XR: Do you have a favorite memory of coffee?
AC: Apart from that amazing flat white in Rococó, one of my favorite memories was the first time I drank an AeroPress. This was at Avellaneda; I remember the barista explained the process to me in a very romantic way, with words that were easy to understand. I felt in love with coffee—I didn’t know there were so many ways to prepare it.

XR: Was there something that inspired you to compete?
AC: Yes, the first time ever I saw a barista competition. This was in 2014; I look back and I recall being impressed. I found all the baristas there so brave! Being on that stage and sharing coffee with the judges is difficult, and every single one of them had a lot of courage. Afterwards I said to myself, “One day I’m going to be there, one day I’m going to win.” So I trained and trained, and then competed for the first time last year and finished in third place. This year I trained harder and visited the farms in Veracruz in July. Part of my trainings were with the SWAT, which is a team of experts from San Remo who helped create the Opera espresso machine. I couldn’t have done this without Ana Garcia and Araceli Benitez, my coaches. 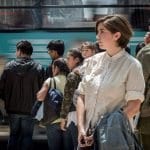 ABOUT THE AUTHOR
Ximena Rubio has been working in coffee for seven years. She believes the coffee industry in Mexico should be a source of inspiration for other producing countries. She thinks Mexico has great potential because of how united its baristas, roasters, and farmers are—she’s here to tell their stories.