Two years ago, Constantin Hoppenz was disqualified from the German Brewers Cup. Now he’s the reigning national champion and placed fifth in the World Brewers Cup in Budapest. We sit down with Constantin to talk about his career, his unique brewing method, and how his disqualification helped him win this year.

BY JOSHUA DUSK-PEEBLES
SPECIAL TO BARISTA MAGAZINE
Photos courtesy of Constantin Hoppenz
Constantin Hoppenz is the current German Brewers Cup champion, and took fifth place in the World Brewers Cup at the World of Coffee in Budapest, Hungary, earlier this year. We ask him about his early coffee career, why he chose to compete, and the lessons he learned from his performance at the German Brewers Cup two years ago that led him to being disqualified—but ultimately made him a better competitor.
Joshua Dusk-Peebles: Hi Constantin, thanks for taking the time to talk with me! First things first: How long have you been working in coffee? What originally attracted you to it?
Constantin Hoppenz: I started to work in a coffee shop while studying in Berlin about three years ago. I’ve always had somewhat of a passion for coffee and for food products and cooking in general, so I enjoyed making good coffee at home for myself.
In the first place, it was probably the hidden complexity of coffee that attracted me so much. Discovering coffee is like walking through a door with only three more doors behind it to open— and then three more and more and more.
Every time you learn something new, you just realize how much more you still have to learn.
JDP: With that being the case, it’s interesting that simplicity was the major theme of your presentation. What are some things shops can do to help their coffee programs be more simple while also being great?
CH: I think a coffee program can only be great if it is simple. Offering a small range of seriously contrasting coffees or beverages will give customers a stronger sense of having options. Rather than having all synonyms for different-sized milk drinks on the menu, I recommend to focus on what makes each individual drink valuable and distinct, and to kick out everything else.
JDP: Speaking of shops, can you tell me a little bit more about where you work?
CH: I work at Bonanza Coffee based in Berlin. It  was one of the first major specialty-coffee shops in Germany back in 2006. Since then, Bonanza has grown to a fully professional coffee roastery that I’m honored to call myself a part of. I would say that a big aspect of why I like working with this company so much has to do with the balance between a strong team spirit and individual dreams that everybody at Bonanza is encouraged to reach for.
JDP: And they obviously encouraged you toward the competition world! What was your favorite part of competing? What was your least favorite part?
CH: My favorite part is the time with the judges on stage. When you are working so long and hard for this competition (and probably the over-caffeinated, sleepless nights the two weeks before competition are my least favorite part), it is so satisfying to finally brew your coffee for such a professional and experienced panel of coffee lovers. The chance to satisfy or even surprise this group of people is the biggest honor for a barista in coffee competition.
JDP: That’s a great perspective! Yet, being judged can lead to frustration. You were disqualified two years ago during the German Brewers Cup. How did that feel? What inspired you to keep going?
CH: Well, first I was pretty desperate [after being disqualified]. But when I got my debriefing, the judges encouraged me to come back because my coffee was tasting very good. I felt once more inspired to compete, and so I learned from my mistakes in pursuit of becoming a better competitor. Whatever you do, you gotta read these rules at least 25 times! Like, I’m serious, read it until you can quote from it!
JDP: During this competition, your brew time was five minutes, which is a bit longer than we typically see in the Brewers Cup competition. Can you talk more about the benefits of that choice?
CH: Brewing with patience is almost always better. We know that coffee has a wide range of flavor and taste compounds that all extract at different rates. Sweetness needs more time to become soluble than acids or volatiles in your coffee. Therefore, time should be used rather than more energy to extract (higher temperatures, more agitation, and so on). Just as in espresso, brewing time is only a secondary variable. Yield, pressure, and temperature are much more important. I often find long brews are richer and more layered than quickly brewed cups of filter coffee.
JDP: What’s something you’ve learned from outside of the coffee world that has made you a better coffee professional?
CH: Looking at more traditional and mature industries such as the wine or beer industry taught me that quality is not the same as specialty. What is special only differs by being different from the rest. It is a form of exclusivity and limitation, in my opinion, that in our young and hungry third wave coffee scene too often leads to an undervaluation of broadly available, good, clean coffee. What used to be special and rare will become a new industry standard, and yet new specialty has to be found. If, however, we want to be successful as an industry at large that promotes producers sustainably, we must find a way to value quality more than specialty.
JPD: That’s a great perspective. I hope coffee leaders and influencers take what you are saying to heart. Thanks again for sharing!
Stay tuned for a write-up of and experiment with Constantin’s unique Brewers Cup recipe! 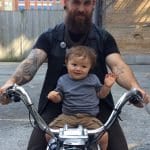 ABOUT THE AUTHOR
Joshua Dusk-Peebles works as a technician and educator for Counter Culture Coffee in Chicago. He loves exploring, experimenting, learning, and sharing what he has discovered with others. Before falling into the world of coffee, he spent time working as a diesel mechanic, an itinerant preacher, a bike messenger, and a vegan cook. Nothing makes him happier than an outdoor adventure with his family. He can be reached at dusk.peebles@yahoo.com or found online at duskcoffee.com.
About baristamagazine 1802 Articles
Barista Magazine is the leading trade magazine in the world for the professional coffee community.
Website