Connor Bramley, the two-time French Brewers Cup Champion discusses recovering from injury, taking time off from competing to judge, and why he is a competitor at heart.

Connor Bramley is the two-time French Brewers Cup champion, and he and I sat down for a chat on the train on our way to the 2018 French Brewers Cup Championship in Marseille. I had many questions for him about his motivation for competing, why he chose to judge this year, and also about his recovery from a recent accident: Last year, one month after Connor represented France in the World Brewers Cup in Budapest, Hungary, he had an accident with a glass cocktail shaker that left him with severed tendons and a three-inch L-shaped scar on his right wrist.

Lacy Audry: In the days just after the accident, were you thinking about how this would affect competing?
Connor Bramley: My immediate thought was: Will I ever recover enough strength to pour with my right hand? Even something as simple as pressing a button on the EK or carrying my own luggage full of coffee equipment to competitions was not possible for months after the accident. I am starting to regain strength now, but I was definitely wondering if I’d have to reconstruct my workflow to do everything with my left hand, and whether that coffee would be any good.

Everything suddenly became really blurry. The not knowing was the most stressful part. I thought about 2018, and wondered whether I’d have enough strength in time to compete. Finally I just said that the stress isn’t worth it, and that I should focus my efforts on getting ready for 2019. I decided to judge and take the opportunity to learn how it is on the other side of the table. I really wanted to compete, but I also really wanted to judge as a way of giving back to a community that has given so much to me.

LA: Why do you compete?
CB: Competition is a way to test your boundaries. It pushes you to your limits in sensory analysis, technique, and performance under pressure. It is also a way of taking calibration to the next level. In a café, you might spend a bit of time in the morning dialing in a coffee and then serving it to 200 people that day, and if you are lucky you might have one or two customers [with whom] you get to discuss the sourcing, roasting, and brewing method of your coffee. But in competition, I spend months roasting and calibrating that culminates in one moment, showcasing one coffee for four judges, and sharing with them all of the thought and effort that went into that cup.

Last year I took a rare Gesha and roasted the s***out of it. A ton of profiles, waters, changing different variables, and when I got on stage, all I was focused on was sharing this amazing coffee with those four people. There’s nothing better. Sometimes I don’t hit the mark, but it’s the working toward it that makes the difference.

LA: Your hand is doing better and the tendons are growing. What do you still have to overcome in competition?
CB: My biggest weakness is going over time. I get on stage, and I just want to share everything I learned about the coffee. I have to get better at time management.

LA: What do you hope to get out of judging this year?
CB: Already, just from calibrating with the judges and seeing how the rules are used, I have learned so much. Just for that alone, it was worth taking a year off, but I am really looking forward to watching the performance of the other competitors, tasting their coffees, and seeing what choices they make. Usually, I am too invested in my own preparation to pay attention.

LA: Will you compete again next year?
CB: Oh, definitely. Even if I don’t win, what I learn from each competition is more valuable than any trophy.

LA: Can you share any details on methods or concepts you’ve tried out in competition?
CB: In 2015, I did an immersion-style brew that was filtered with a one-cup V60, with the tip of the filter cut off, holding marbles wrapped in AeroPress filters. This sat on top of a two-cup V60 with a regular filter. The idea is that the larger particles stick to the marbles, and allow a faster filtration of the coffee slurry.

I then just stood there with the judges, focusing on the details of my coffee, roast, and brew method. When the timer went off, I realized I didn’t rinse my filters, nor did I have enough to rinse them before serving. The AeroPress filters take a while, as they absorb quite a bit of water.

Anyway, I had a bit of a paper taste in my coffee. I still came in fourth place even with the mishap. Next year, ideally, I’d like to 3-D print a similar filtration system.

(After the competition, I snuck in one more quick question.)

LA: Did you learn anything from judging?
CB: The rules are incredibly important. I already knew that, but simple technical things can cost a lot of points, which could eventually mean the difference between a podium finish and not making the finals. Also, as a competitor we expect that the judges have it easy and that they’re well practiced at judging competitions, but the reality is that it’s very stressful and intense being a judge—mostly because we want to make sure that we are totally fair and objective, and because we are concentrating so hard. I know that in my future competitions I need to make the judges feel at ease and make their lives easier, exactly as they do for me.

Next year, Connor plans on competing in five coffee competitions in 2019: Brewers Cup, Barista Championship, Coffee and Good Spirits, Cup Tasters, and the second-annual Roasters Competition organized by the SCA France. He might have even inspired me to compete. Don’t hold me to it though! 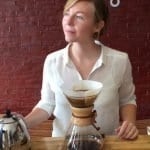 ABOUT THE AUTHOR
Lacy Audry is a freelance writer and independent coffee consultant based in Paris. She previously founded Kalsada Coffee, the first exporter of coffee from the Philippines to meet specialty-coffee standards.