The February + March 2018 Issue of Barista Magazine takes on sexual harassment and on-the-job romance policies, recaps some of the most exciting independent coffee events of 2017, and profiles World Barista Champ Dale Harris of the U.K.

We’re thrilled to debut the February + March 2018 issue of Barista Magazine today, which can be read in full for free online and via our free app. If you love the feel of Barista Magazine in print, never fear: This issue will be hitting subscribers’ mailboxes this week. (Not a subscriber? Become one here, or buy an individual issue.)

That striking cover photo of the United Kingdom’s Dale Harris—recently crowned World Barista Champion (WBC)—was shot by the amazingly talented Al Higgins (who also shot the December 2012 + January 2013 cover featuring Ireland’s Colin Harmon), and the photos accompanying our feature article on Dale are equally impressive. You’ll want to sit with this article—penned by Barista Mag contributing writer and editor Chris Ryan—for a spell, and get to know Dale, a kind, clever barista who had pursued the U.K. Barista Championship title through nine competitions. When he finally won, he went on to win the WBC right out of the gate, a feat only accomplished by a select few WBC champs before him.

Speaking of the WBC, we interviewed all six of this year’s finalists about their incredible signature drink creations—you won’t want to miss it.

We’re also quite proud to share a double feature inspired by news of late on the importance of sexual harassment policies and standards for structuring workplace romances, written by Lauren Lathrop and RJ Joseph, respectively. Frequent Barista Mag illustrator Jessica Ornelas created the incredible art for both stories. 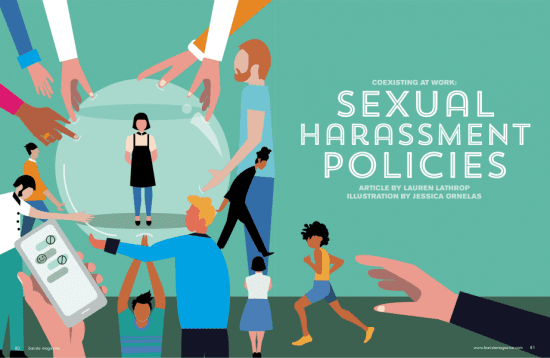 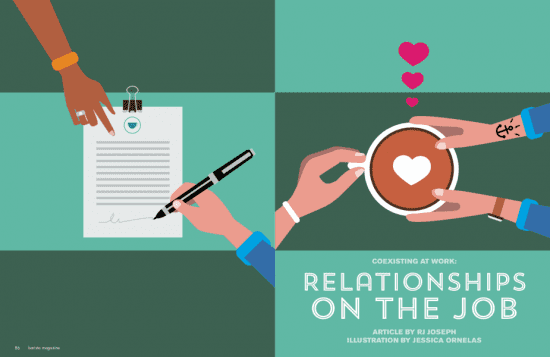 Barista Mag contributing writer and editor Erin Meister wrote the smart and helpful article “The Unglamorous Side of Running a Coffee Business,” wherein she explores and dissects the crucial (though sometimes tedious) elements of operating a successful shop. Passion for and skill at making coffee are all well and good, but bookkeeping, scheduling, and managing are equally important in the effort toward building a long-lasting and financially solid business.

Our popular “High Maintenance” columnists Alex Lambert and Jason “Double J” Johnson are back with a new installment, wherein they answer your pressing equipment questions with a lot of know-how and some awfully good humor.

We look back at some of the best independent events to take place in 2017, grassroots efforts conceived, organized, and produced by enthusiastic visionaries from our own community. These are not reviews of trade shows and large-scale conferences, but rather events created by folks wanting something different, something specific. We hope you’ll be inspired by this showcase to establish the event of your dreams in your own city. 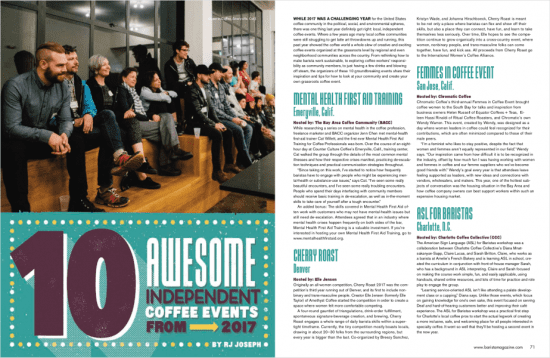 Barista Mag Online Editor Ashley Rodriguez took to the streets of her hometown, Miami, for a Field Report on this rapidly growing coffee scene, which is distinctive for mixing a traditional Cuban coffee culture with third-wave sentiments. 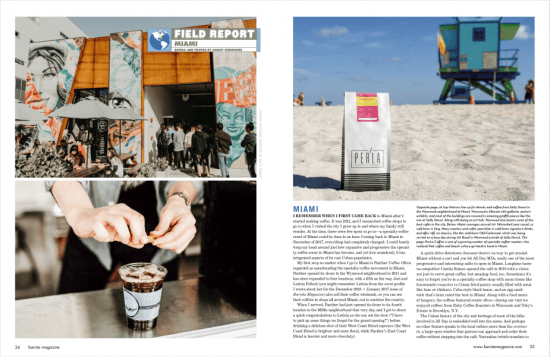 Ashley also interviewed the incomparable coffee educator Ildi Revi about her colorful and adventuresome history living and raising her kids on a coffee farm in Zimbabwe, their life back in the States, her efforts creating educational resources while working for the Specialty Coffee Association of America, and now her work at Ally Coffee. 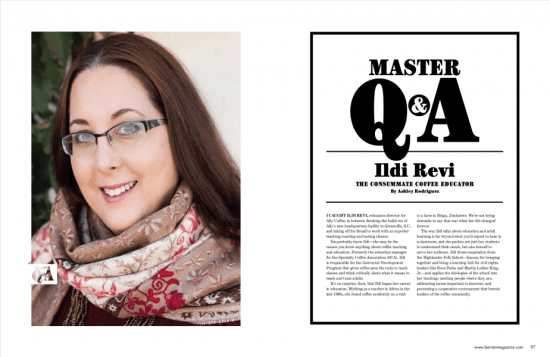 And there’s much, much more! We hope you enjoy this issue of Barista Magazine as much as we loved putting it together for you.