Writer Jason Huffnagle is traveling all across Europe, drinking coffee and sharing with us the cultures, recipes, and traditions of the beverage all across the continent. In this edition, he visits London.

Catch up with this series by checking out part one and part two.

Being one of Europe’s largest cities, London is not in short supply of incredible coffee shops. The baristas I spoke to during my visit were serious about their craft and eager to share their coffee knowledge, especially after learning I had been a barista in the United States.

One of the baristas I met recommended downloading the London Coffee Guide to see the breadth of diverse offerings the city provides. Although the $3 price is a bit steep for an app, it contains 245 profiles on different independent coffee shops, cafés, and roasteries in London. Of course this may be only worthwhile if you spend plenty of time in London or will be visiting for an extended period.

I also found a continuing trend from Edinburgh—almost all of the shops I visited in London maintained a rotating coffee program, with some of them having the same offerings as their Scottish counterparts.

Store Street has a total of three locations across the city. I frequented what I can only assume is their namesake store, as it can be found at 40 Store Street. Located in the Fitzrovia neighborhood of London, they serve a great filter coffee but also do a solid breakfast, offering toasts with a variety of spreads (including the very British side of beans), wholemeal pancakes, and poached eggs.

Located near the British Museum, the shop is a common stop for visitors who have soaked in the museum’s world-renowned collections. It is also near Russell Square and the Soho Square Gardens, offering nice walking scenery for those placing “takeaway” orders.

With multiple locations—each with a unique interior design—and baristas with an intensive approach to coffee, visitors needn’t labor too much over their decision to visit Workshop. The two locations I visited in Fitzrovia and Marylebone had plenty of seating but may not be the best place for you to, somewhat ironically, get any work done due to the limited availability of table space.

For a price, Workshop also offers opportunities for amateur coffee enthusiasts to brush up on their coffee knowledge. They offer two classes on weekends—one on how to brew better drip coffee at home and the other an introduction to espresso fundamentals.

Note: They also roast their own coffee.

Inside the Building Centre, I found The Gentlemen Baristas—with its amiable staff and and delicious coffee—to be positively civilized. It’s located in Fitzrovia and just down from Store Street Espresso. Upon entering the Building Centre, I enjoyed the city development exhibition on the ground floor, which is currently showing a special exhibition on nightlife in London. There is a giant model of the city that the London newcomer may find especially useful, as it uses video and a projector, in tandem, to present the layout of the city’s neighborhoods and show how London’s infrastructure development has and is currently adjusting to transportation demands.

Although I did not visit it, The Gentlemen Baristas also has another location on 63 Union Street. Located on the south side of the River Thames, this shop is only a short walk from Shakespeare’s Globe Theatre and the Borough Market, two must-see spots.

As the name indicates, Artigiano is both a coffee shop and a bar, but don’t let that make you question their coffee cred. Affordable and delicious, this shop also serves delicious pastries baked onsite daily and is but a stone’s throw from St. Paul’s Cathedral, an Anglican site that serves as the seat for the Bishop of London.

Although I am saddened to say “cheers” to the United Kingdom, I am eagerly anticipating my next stop: Rome, Italy.

I am excited to experience Italia’s unique coffee culture, which is known for its traditionalism. Will there be a stark contrast between Italian coffee and the third-wave shops with which I’m more familiar? Or will they share some surprisingly common ground(s)? 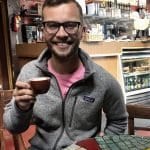 ABOUT THE AUTHOR
Jason Huffnagle is a freelance writer for Barista Magazine who has worked in coffee as a barista for six years. Having recently left his “adult job” in the U.S. Senate, the Alaska native is spending the next four months traveling throughout Europe. You can keep up with his coffee-fueled travels and other exploits by following him on Twitter.